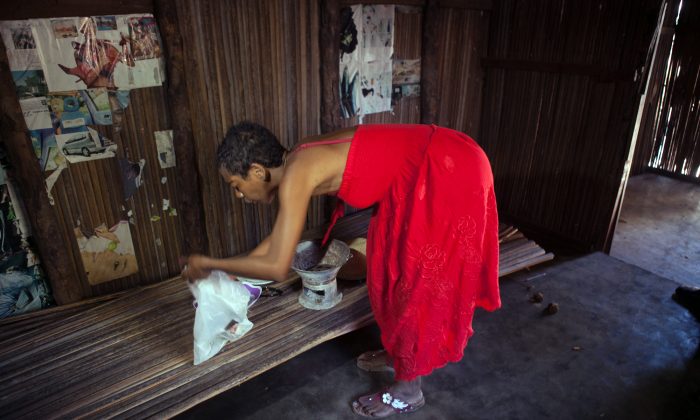 Sebastian Judalet and Roberto Gianfala were killed by a mob in Madagascar. A woman works on October 6, 2013 inside the small hut Roberto Gianfala rented before he was lynched on October 3, by a furious mob which suspected him of killing a boy. (Rijasolo/AFP/Getty Images)
Africa

Sebastian Judalet and Roberto Gianfala were killed by a lunching mob on the tourist island of Nosy Be, off the northwest coast of mainland Madagascar.

Locals accused them of killing an eight year old boy, for the purposes of harvesting the boys organs. The boy was found dead on Oct. 2 with several body parts missing.

Local gendarme Guy Bobin Randriamaro told RFI that the two men “admitted under torture from the crowd that they were organ traffickers.”

One island resident, Lala, told Al Jazeera that locals had made sure the men were guilty before they were burned alive.

“They spoke for a long time until the morning hours, and then the foreigners confessed they had killed the child. We have it on video,” he claimed, but provided no evidence.

According to the news agency, mob justice is common in Madagascar.

In an audio recording published by French daily Le Parisien, members of the crowd can be heard interrogating Judalet, who tries to convince the mob of his innocence.

“I am the victim of a conspiracy,” Judalet says, reported France24. “I do not like children, absolutely not, and I don’t like people who have sex with children.”

A man asks him: “You don’t like children?”, to which Judalet, stammering, responds: “I love children, yes, I have a little girl.”

In tears, he makes a final plea to the crowd: “I’m telling the truth, strictly the truth.”

Gendarmes said security officers fired shots in the air, trying to disperse the crowd. At least one person died during the process, and two others were wounded.

The mob burned down eight houses occupied by local police.

Madascan authorities have imposed a curfew after the mob burning.

A third man, a local, was also burned after being accused of being involved with the death.

About 700 French people live on Nosy Be, which has around 40,000 residents. Judalet’s passport showed he was a regular visitor there. He worked as a bus driver in France.