Sebastian Gorka on ‘The War for America’s Soul’ 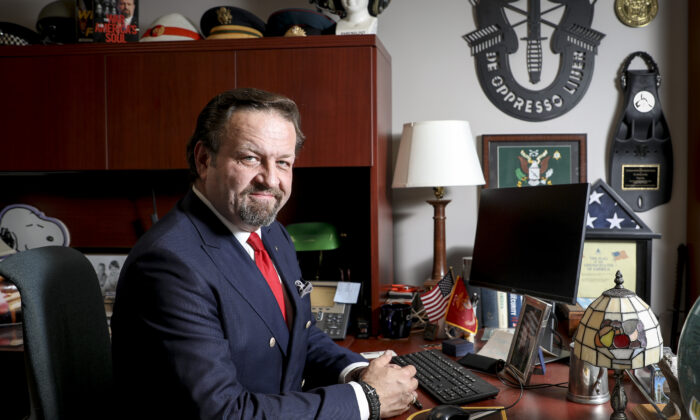 When conservative radio show host Sebastian Gorka was 8 years old, he was happily playing on the beach during a family vacation in the south of France when something caught his eye.

As his father was emerging from a swim in the ocean, Gorka noticed white lines on his father’s wrists—something he’d never noticed before.

“Son, that’s where the secret police bound my wrists together with a wire behind my back, so they could hang me from the ceiling of the torture chamber,” Gorka’s father said.

“That’s when my life changed,” the former Trump White House adviser said in an interview with The Epoch Times for the “American Thought Leaders” program.

“From that moment onward, I knew at a genetic level, at a visceral level, at the level of my soul, that the word evil isn’t reserved for mythical stories of minotaurs and dragons,” Gorka said. “Evil is real. Evil lurks in the hearts of men, and is done by men unto other men.”

Gorka’s father had been an ardent anti-communist dissident in Hungary, and as a result, he was arrested, tortured, and sentenced to imprisonment for life. Six years later, he was liberated by the short-lived Hungarian Revolution of 1956, which was swiftly crushed by Moscow. Gorka’s father eventually escaped to Austria by crawling through a minefield with the 17-year-old daughter of a fellow prison inmate—who would later become Gorka’s mother.

“That background, my family’s history, that experience, shaped everything I do,” Gorka said.

In his new book, “The War for America’s Soul,” Gorka details with alarm how the political left was radicalized and how socialist, communist ideology managed to penetrate and subvert core American institutions.

In Gorka’s view, there’s a war being waged for the soul of America, namely “the collective principles, the first principles, upon which this nation was founded by the founding fathers.” The first principles refers to a strongly held belief in the “individual and the God-given rights of the individual—what Reagan called that ‘shining city on the hill,’” Gorka said.

The subversion of first principles is evident on today’s campuses.

“How is it that you can go to an Ivy League college today in America to major in English literature, and for four years not study William Shakespeare … because he’s white, he’s male, and he’s a heterosexual, and therefore, he’s an oppressor?” Gorka said.

Gorka was compelled to write “The War for America’s Soul” after an incident at his daughter’s college graduation.

In front of crowds of graduating students and their families and friends, a girl walked up to Gorka to say, “[Expletive] you, you [expletive] Nazi!”

“When you call somebody—whose parents suffered under fascists, under Nazi occupation—a Nazi … what have you done to the content of that word?” Gorka said.

“When everybody you disagree with is a fascist or Nazi, you’ve denuded that word of any content,” Gorka said.

“That’s why I wrote ‘The War for America’s Soul’: to explain how in America, the country that people flee to for their freedom, you have a 19-year-old girl with that level of brainwashing behave the way she did in public,” Gorka said.

“In large part, we are responsible. The right is responsible because we allowed them to implement a plan which they call ‘the long march through the institutions.’”

Drawing inspiration from Andrew Breitbart’s book “Righteous Indignation,” Gorka outlined what he sees as the origins of radical leftism in “The War for America’s Soul.”

The ideological beliefs of political leaders on the left, such as Rep. Alexandria Ocasio-Cortez (D-N.Y.), former President Barack Obama, and Hillary Clinton, can all be traced back to the Italian Marxist philosopher Antonio Gramsci, in Gorka’s view.

The forefathers of the modern-day left in America—individuals such as Gramsci, Gyorgy Lukacs, Max Horkheimer, Herbert Marcuse, and Saul Alinsky—”had an epiphany: They realized the flaw in Karl Marx’s writings and in Engels’s writings,” Gorka said.

“The attempt to create a communist nation failed almost exclusively in every single place that was tried, with the exception of countries like Russia or China, where there wasn’t a developed middle class, and where the so-called revolution could leverage a peasant class,” he said.

“If you tried communist revolution in robust, healthy Western nations like America, they’d be doomed to failure because of the traditions, the strength of the family, civic society, and so forth.”

So they adopted a different strategy. Instead of openly attacking traditional institutions, “you organize inside of existing structures until you can radicalize them wholeheartedly from the inside,” Gorka said.

Saul Alinsky founded modern community organizing and articulated his tactics in “Rules for Radicals.” At the very beginning of “Rules for Radicals,” Alinsky penned an acknowledgment of Lucifer—“the first radical known to man who rebelled against the establishment and did it so effectively that he at least won his own kingdom.”

When Hillary Clinton studied at Wellesley College, she wrote her senior thesis on Alinsky’s model.

“This is a plan that’s been gestating for 80 years, and that’s how we get to the Democrat Party that is typified by radicals, communists, socialists,” Gorka said.

In Gorka’s view, the fundamental basis of modern leftist ideology is a belief in the perfectibility of man.

“Whether you’re Karl Marx or Alexandria Ocasio-Cortez, the common thread, the connective tissue, between AOC and the founder of communism is this belief that human beings are just malleable, they’re like animals, you can change them, you can engineer them, and you can create perfection on earth,” Gorka said.

This is fundamentally at odds with the conservative worldview that believes “man is fallen, man can never be perfected,” Gorka said. Conservatism tells people to “conserve those things that have been proven over centuries or millennia to work.”

“And you understand that there’s only one paradise, and it’s not on this earth; it’s in the afterlife,” Gorka said.

“If you believe in the ‘perfectibility of man’ argument, who’s going to do the perfecting? It’s not the individual! It’s the state. Yes! The elite is granted this magic power, the philosopher-king power, to mold society as they deem fit.

“That’s why the hoary old saying is so true: ‘Big government, small citizen.’ The more you cramp the individual” and restrict the liberties of the individual, “the more power you give to an elite. And unfortunately, in many cases, members of that elite aren’t elected.”

“That’s what we’ve seen in the last three or four years in America, this concept of the ‘deep state’ or the permanent state. These bureaucrats who say, ‘Well, presidents come and go, but I’ve been working in government for 20 years, and I know better.’”

As a deputy assistant to President Donald Trump, Gorka witnessed that firsthand—what he perceived as a total disregard for the president’s wishes by individuals within the federal bureaucracy.

“The left and the right fundamentally betrayed middle America in the last 60 years,” Gorka said.

He points to the bestselling memoir “Hillbilly Elegy” by J.D. Vance, who details what it was like growing up in a poor Rust Belt town.

As jobs were outsourced abroad, manufacturing in America declined, millions of Americans were left unemployed, and prospering towns became shadows of their former selves. “That’s how generations were destroyed,” Gorka said.

As Gorka writes in his book, “Entire communities faced economic decline, neighborhoods deteriorated, social bonds frayed, and into this environment of soul-crushing despair came an influx of drugs that made captives of hopeless people.”

“Along comes a man, a billionaire from Manhattan, who says, ‘I am going to stand up for the forgotten men and women,’” Gorka told The Epoch Times.

“Donald Trump became president despite the GOP, not thanks to the GOP,” Gorka said. It was a Republican president, Richard Nixon, who opened relations with communist China. Communist China was then given Most Favored Nation status and World Trade Organization membership and welcomed into the international community. In Gorka’s view, U.S. leaders were motivated by the “absolutely absurd” belief that if “we economically liberalize our relations with a communist dictatorship, then it must become democratic in the end.”

Instead of facilitating the democratization of China, U.S. policies and the avid investment of Western business and financial leaders instead allowed the Chinese Communist Party to exploit its trade relationship with the United States and steal Western technology to its own advantage, Gorka said. Along the way, it also allowed fentanyl to be pumped into the United States, devastating communities in the heartland. China is the largest source of illicit fentanyl in the United States, according to a November 2018 report by the U.S.–China Economic and Security Review Commission.

Trump connected with the Americans whose communities had been devastated by policies of both the left and the right, and “that’s how we elected the first non-politician, non-general, to the highest office in the land,” Gorka said.

“Since 1776, we’ve never elected a president who wasn’t either a general or a former politician. From Washington to Obama, everyone was a senator, congressman, governor, or a general like Eisenhower.

“The American people sent a very interesting message to the world, when we said, ‘We’ve had it with that schlep. We want somebody who has no connections to the swamp.’ That was a historic moment that bears repeating.”