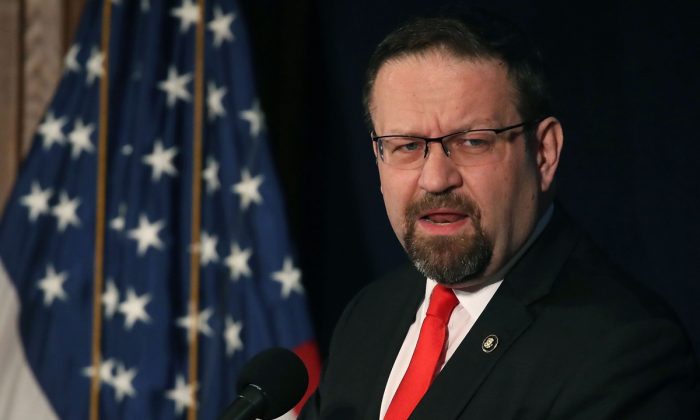 Sebastian Gorka: ‘It’s a Disgrace That Robert Mueller So Betrayed His Oath of Office’

Due to ongoing investigations, Mueller was obligated to keep his responses to unredacted information from his report.

“His lies were plain for everyone to see,” Gorka told The Epoch Times. “We don’t do this in America. We don’t use law enforcement intelligence for political purposes against our political rivals … that’s what the Mueller investigation was.”

Gorka said he has faith in Attorney General William Barr to get to the bottom of how the FBI counterintelligence investigation started and to hold those in intelligence agencies accountable.

“This is the next iteration of the story: the genesis and the culpability of what are called liaison services in the broader intelligence community.”

Republicans are still questioning to what extent the Obama administration was involved with spying on the Trump campaign during the 2016 election.

“There is no way on God’s earth that the Obama administration at the level of director of the CIA, NSA, and FBI initiated Crossfire Hurricane, initiated political espionage operations on the Republican Party and their candidate, without the White House knowing and without the president knowing,” Gorka said.

“We have the Strzok and Page text which says Obama wants to know everything, the White House wants briefings, so it’s absolutely… it is in the realm of fantasy that President Obama did not know about the illegal espionage on the Republican Party and Donald Trump.”

‘What Page Is That?’

Mueller at times during his testimony seemed unfamiliar with some details of the report.

Gorka said he strongly believes that it was Mueller’s top prosecutor, Andrew Weissman, who was the one that wrote the report.

“I mean look at the testimony,” he said. “They were asking him simple questions regarding Fusion GPS, the progenitor of the opposition research dossier that was used to obtain illegal FISA warrants against the Trump campaign, and he doesn’t know? And constantly he’s saying, ‘Oh could you tell me what page that’s on?'”

Gorka said Mueller made a political decision to provide top cover as a “Republican” to a band of Hillary Clinton donors and lawyers, and that his deputy, Weissmann, was with Clinton in New York the night of the election expecting to celebrate with her.

“It was a travesty, and it’s clear the person who learned the most about the Mueller report yesterday, was Robert Mueller,” Gorka said.

Marc Ruskin—an adjunct professor at the John Jay College of Criminal Justice, former assistant district attorney, former FBI agent of 27-years, and author of the book “The Pretender: My Life Undercover for the FBI,”—told The Epoch Times that he felt at points in Mueller’s testimony that it appeared Mueller referred back to his report because he was not essentially competent to answer.

“I have the impression that there are parts of the report that were drafted by his staff and with which he is not fully conversant,” Ruskin said.

Ruskin said one particular example that struck him was when a Senator questioned Mueller on the transcript of a phone call from the president’s attorney to the attorney for the then-national security adviser, retired Lt. Gen. Michael Flynn.

“There was a question from the Senator,” Ruskin said, “regarding the non-inclusion of exculpatory comments by the president’s attorney.”

Ruskin said it appeared that Mueller had been unaware at that point whether the transcript was from the original or redacted form of the report.

He perceived Mueller to be unaware that comments by the president’s attorney in the transcript had been excised in such a manner so as to appear that the questions would have been asking for inappropriate action.

Ruskin said: “In fact, the entire transcript of the conversation made it clear that the attorney was not deliberately asking that actions to be taken that were not correct and ethical.”

Sen. Lindsey Graham (R-SC) said the day following the hearings that Mueller served his country well and hoped the two-year investigation and consequent report would not define his career.

“Well, I think it would be good for the country if we could move on from the Mueller report,” Graham said. “Let that be the final word and see if we can work on securing our elections against interference in 2020.

“And I’m going to look at how the whole investigation started and why it went so long,” he added.

House Democrats have vowed to keep investigating the president in the aftermath of Mueller’s testimony, the results of which remain the same—no obstruction, no collusion.