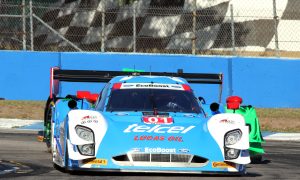 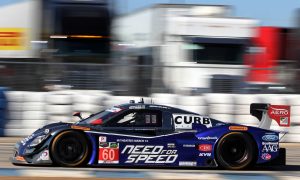 SEBRING, Fla.—Sebastian Bourdais in the #5 Action Express Coyote-Corvette won his first Tudor United SportsCar Championship pole Friday afternoon, qualifying fastest for the 62nd Mobil 1 Sebring 12 Hours with a lap of 1:51.917at 120.303 mph. Bourdais was the only driver in the Prototype class to break 1:52.

Bourdais and his co-drivers Joao Barbosa and Christian Fittipaldi dominated at the Roar Before the Rolex 24, won the Rolex, and was consistently quickest at the Sebring Winter Test, but its performance was inconsistent at Sebring 12 Hours Practice. The car ran third Thursday morning, eighth Thursday afternoon, second in night practice, and seventh Friday morning. Based on the uneven performance, Bourdais said, he really hadn’t expected to be in the hunt for the pole.

“It was a great qualifying for us,” he said after the session. “We didn’t exactly know where we were going to be this morning we couldn’t put a lap together. Traffic seemed to be a big difficulty in the exercise—it was very difficult to get a read on the car since we couldn’t do three corners on the line so it’s tough to know exactly where the balance of the car a is and to get into a rhythm so—it’s not like it’s going to be any easier tomorrow.”

During practice there were 62 cars on track; during qualifying, just the dozen Prototypes. Bourdais, given room to run, proved that the AXR engineers had found the right set-up.

“We got a definite read on how the car is in qualifying because we could string a few laps together and that really gives you a good feel for it. I guess we were pretty spot-on because there was a bit of understeer and a bit of oversteer but overall the car was quite enjoyable to drive. I just took my time and strung a few laps together and by the end it was pretty optimized I guess.”

The AXR squad had some help from fortune: a couple of its toughest competitors, the two Ganassi Riley-Fords, had minor accidents early in the session.

“A lot of guys made mistakes before they even banked a lap. It shows how difficult the conditions are here at Sebring. With a wind like this, you get a double-faced car. It goes from oversteer to understeer as soon as you turn a corner, which keeps things very interesting behind the wheel. These cars are very sensitive to the wind and to traffic it can change the car a lot.

“Anyway, hopefully we can keep the pace. It should be quite close tomorrow.”

The Tudor United SportsCar Championship 62nd Mobil 1 Sebring 12 Hours begins at 10:15 a.m. The first three hours will be televised live on Fox Sports 1. At 1 p.m. coverage switches to a live stream on IMSA.com for the rest of the race. Fox Sports 1 also will carry a three-hour highlight show on Sunday beginning at 8:30 a.m.