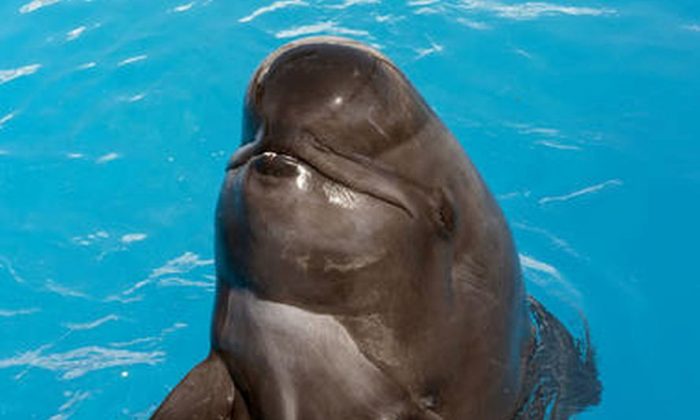 This undated photo provided by SeaWorld San Diego shows Bubbles, a short-finned pilot whale that lived at SeaWorld San Diego for nearly 30 years. The park reported that Bubbles died Thursday, June 9, 2016. She was believed to be in her mid-50s. A necropsy will be performed to determine the cause of death. (Mike Aguilera/SeaWorld San Diego via AP)
US

SAN DIEGO—Bubbles, a short-finned pilot whale that lived at SeaWorld San Diego for nearly 30 years, has died, the park reported.

Bubbles was in her mid-50s when she died Thursday. A necropsy will be performed to determine the cause of her death.

“While Bubbles will be greatly missed by all who knew and loved her, she has helped generations of park visitors gain a better appreciation for all animals and the ocean environment,” SeaWorld said in a statement.

Female pilot whales generally live to be about 60 in the wild, and Bubbles was believed to be the oldest of her species in a zoological park, SeaWorld said.

She was captured off the California coast in the 1960s and performed in marine park shows most of her life. She spent two decades at Marineland of the Pacific in Rancho Palos Verdes, where she had her own stadium.

She was moved to SeaWorld in 1987 when Marineland closed.

“I’ve never known an animal with a more impressive air spin, where she jumps out of the water and spins around at lightning speed,” Bill Winhall, assistant curator at SeaWorld San Diego, said in a 2010 publicity release.

Pilot whales, like killer whales, belong to the dolphin family and are considered highly intelligent and social, living in pods of 20 to 90. They are not considered endangered. They eat squid and fish and in the wild and can dive to more than 1,000 feet in search of prey.

Animal activists have condemned marine parks for keeping animals that, in the wild, typically roam for thousands of miles. Under unrelenting pressure from animal rights groups and suffering from a drop in ticket sales, SeaWorld announced in March that it was ending its killer whale breeding program and stopping its traditional killer whaleshows.