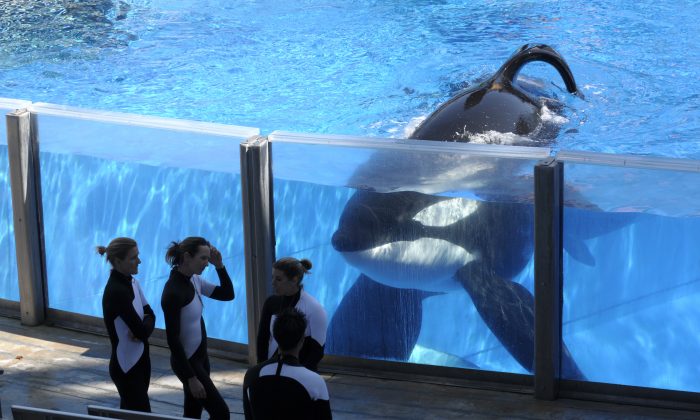 FILE - In this Monday, March 7, 2011, file photo, killer whale Tilikum, right, watches as SeaWorld Orlando trainers take a break during a training session at the theme park's Shamu Stadium in Orlando, Fla. SeaWorld officials say the killer whale responsible for the death of a trainer is very sick. In a post on the park's blog Tuesday, March 8, 2016, officials say Tilikum appears to have a bacterial infection in his lungs. (AP Photo/Phelan M. Ebenhack, File)
Entertainment

SeaWorld: Ailing ‘Blackfish’ Orca Would Have Died ‘A long time ago’ in Wild

On March 9, SeaWorld Entertainment Inc. announced that Tilikum—the subject of a controversial 2013 documentary “Blackfish“—has become “increasingly lethargic,” leading caretakers to worry about the state of the orca’s health.

The six-ton killer whale, which has suffered from health problems in the past, is currently taking oral antibiotics and antifungals for a bacterial infection in his lungs; veterinarians and trainers have been constantly monitoring Tilikum’s health, collecting weekly blood and fecal samples.

The type of bacteria found in Tilikum’s lungs is one, according to SeaWorld veterinarian Scott Gearhart, that can be found in a variety of species, including wild cetaceans. SeaWorld insists that all their orcas receive the “best in marine mammal health care,” Gearhart said in the statement.

Gearhart said he has “no doubt” that Tilikum would have already died of his “chronic and progressive” respiratory illness if he was not living in captivity.

Everyone who actually cares about living creatures.

“Blackfish,” a Dogwoof film directed and produced by Gabriela Cowperthwaite, which depicts Tilikum’s life, suggests otherwise. Since his capture in 1983, Tilikum has been involved in a number of violent and aggressive encounters with humans—most notably, the February 2010 death of trainer Dawn Brancheau at SeaWorld’s Orlando park.

After Brancheau’s death, Cowperthwaite complied amateur footage and expert interviews to imply that Tilikum—and, indeed, captive orcas in general—suffer severe physical and psychological trauma due to their captivity.

The documentary brought the world’s attention to the physical and psychological well-being of the creatures and the ethics of keeping orcas in captivity.

Despite detailed and incensed refutations of the claims made by “Blackfish,” SeaWorld has faced major backlash since the film’s release. This includes, but is not limited to falling stock prices, celebrity admonishment, and citations from U.S. Department of Labor’s Occupational Safety and Health Administration (OSHA).

Tim Zimmerman, associate producer and co-writer of “Blackfish,” although not an expert on orcas, wonders whether wild orcas would suffer from chronic bacterial infections as Tilikum has.

Nevertheless, Zimmerman says SeaWorld’s standard of veterinary care is world-class since SeaWorld views its orcas as a “valuable commodities.”

Inevitably, it seems, Tilikum will die in captivity. Zimmerman believes his death will be a “sad coda” to individuals who worked on the film and those who have campaigned against orca captivity. “His legacy,” continued Zimmerman, “will be that he forced us to confront tough questions about the nature of animal captivity.”