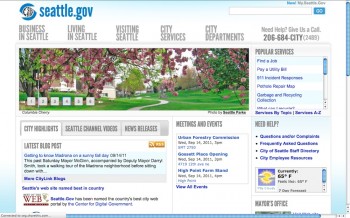 The Seattle.gov website which has earned the honor of Best of Web (BOW) for its official Web portal for a third time. (Screenshot from seattle.gov)
News

The BOW contest, now in its 16th year, was created by the Center for Digital Government to recognize “innovation, functionality, and efficiency of official Web portals of United States cities, counties, and states.”

"A core value of my administration is open and effective government," said Seattle’s Mayor Mike McGinn, in a press release announcing the award. "And we are supporting that value in many ways, including town halls, public performance measurements for city departments, providing online data, and providing user friendly services to all our users on our city website.”

Data.Seattle.Gov was also named a winner in the Government-to-citizen category.

“The goal of every government website is to provide online services and information to constituents,” stated Cathilea Robinett, executive director of the Center for Digital Government on their website. “However, this year’s winners have taken the power of the Web to the next level —combining clear communication, design aesthetic, and easy navigation.”

The center itself is a “national research and advisory institute on information technology policies and best practices in state and local government,” according to its website.

The BOW award for a state website went to Arkansas and for county website it went to Stearns County in Minnesota.