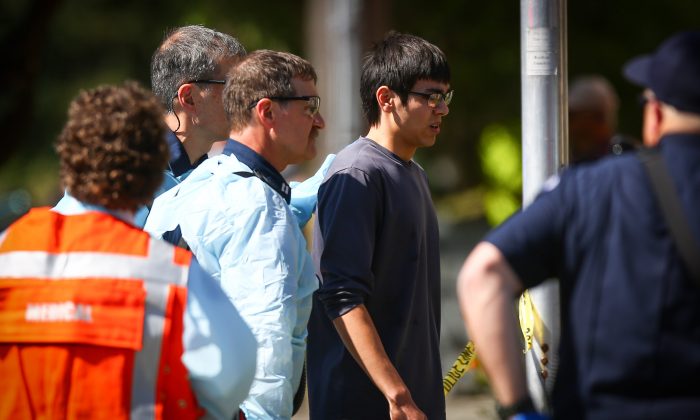 Jon Meis is taken from the scene by medics after a shooting at Seattle Pacific University on June 5. (AP Photo/seattlepi.com, Joshua Trujillo)
News

Maya Angelou said courage was the greatest of all the virtues. Sometimes people ask themselves if they would show courage during a life-or-death test.

Seattle Pacific University student Jon Meis stopped what would have been a mass murder on his campus last week. Though he was unarmed, he pepper-sprayed and tackled the suspect, Aaron Ybarra. After Ybarra was arrested he told investigators he planned to kill as many people as possible and himself, police said. Meiss almost certainly saved lives.

Professor Liviu Librescu died protecting his students during the 2007 Virginia Tech mass murders. He blocked a door with his body so that others could escape. He had survived a Nazi death camp and Communist dictatorship in Romania.

Atlanta public school employee Antoinette Tuff in 2013 convinced a shooter who intended to kill students to surrender with no violence. Afterward, she told a 911 dispatcher, “I’m going to tell you something, baby—I’ve never been so scared in all the days in my life.”

The common thread for these people is altruism. That is where their courage came from. Each of them was thinking of others.

Meis said, in a statement, “I know that I am being hailed as a hero, and as many people have suggested I find this hard to accept,” he wrote. “I am indeed a quiet and private individual; while I have imagined what it would be like to save a life I never believed I would be put in such a situation. It touches me truly and deeply to read online that parents are telling their children about me and telling them that real heroes do exist.”

He was thinking of how the victims suffered, of how precious and irreplaceable any life is, and even of the shooter’s suffering.

He said, “What I find most difficult about this situation is the devastating reality that a hero cannot come without tragedy. In the midst of this attention, we cannot ignore that a life was taken from us ruthlessly, and without justification or cause.”

I’m not sure Meis is right that a hero cannot come without tragedy. Librescu, Tuff, and Meis had already built their heroic characters. I think they built their good characters in the course of leading good lives. The three of them all cared about other people, and that was revealed when they faced mortal danger. We might not have learned their names had they not saved others, but they still would have been brave.

It was compassion that supported their courage.

Meis wrote that when he came face to face with the attacker, “he was not a faceless monster, but a very sad and troubled young man.”

People have been buying items on his wedding registry and trying to give him donations. He has asked that any future donations be directed to the victims of the shooting through Seattle Pacific.