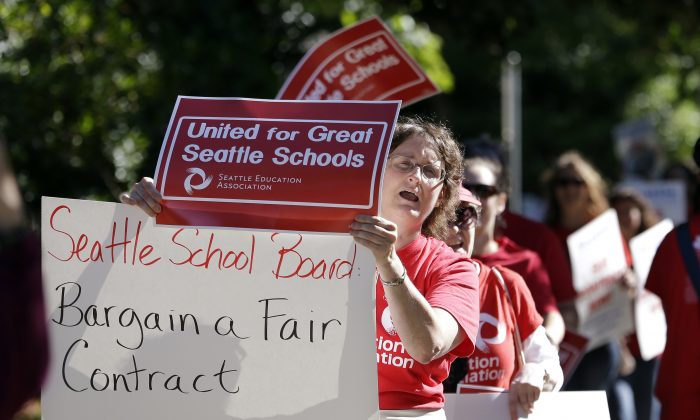 In this Sept. 2, 2015, file photo, dozens of teachers picket and chant as they march outside West Seattle High School in Seattle. (AP Photo/Elaine Thompson)
US

SEATTLE—Seattle teachers have approved a labor contract between the union and its school district, officially ending a weeklong strike that had delayed the start of school for 53,000 students.

The walkout began Sept. 9 in Washington state’s largest school district and was suspended pending the outcome of Sunday’s vote by the 5,000-member union. The sides had reached a tentative agreement last week, allowing the first day of school to begin Thursday.

Members of the Seattle Education Association, which include teachers and support staff, ratified the three-year deal at a meeting Sunday in downtown Seattle.

The Seattle Times reports that of the estimated 3,000 members who attended the meeting, 83 percent of teachers, 87 percent of paraprofessionals and 96 percent of office professionals voted to approve the contract, according to the Seattle Education Association.

“We got many new things in our contract that will benefit students,” Shelly Hurley, a special education teacher and a member of the union bargaining team, said in a statement.

Local Teachers Learn to Make the Outdoors Their Classroom

Intense After-School Tutoring Holds Many Lessons – for Learners and Teachers

Teachers have been working without a contract since the end of August. They had initially asked for a 21 percent raise spread over three years, but they came down dramatically from that request. Educators had complained that the high cost of living in a city with a booming population of well-paid tech workers was pricing them out.

The contract dispute marked a strategy shift by teachers nationwide to take on broader issues that promote the public interest, experts have said. The Seattle teachers union tapped into community protests over too much testing, not enough recess and concerns about racial disparity in discipline and student performance.

Six days of school will have to be rescheduled, which the district said could extend the school year or shorten midyear vacation breaks. Graduation dates for seniors will likely change as well.