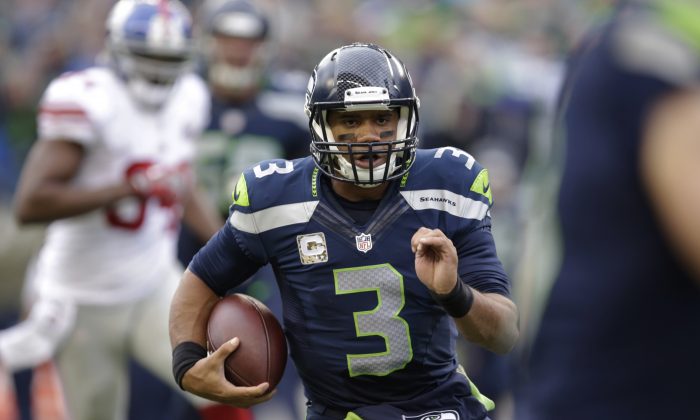 Seattle Seahawks quarterback Russell Wilson runs with the ball against the New York Giants in the first half of an NFL football game, Sunday, Nov. 9, 2014, in Seattle. (AP Photo/Scott Eklund)
NFL

The Seattle Seahawks are preparing for their next game and the news and rumors are ramping up.

Russell Wilson is doing plenty to help Seattle during its three-game win streak.

Even when the Seahawks’ offensive priority has been focused on running the football.

That was evident last week when he ran for 107 yards as part of Seattle’s franchise record day running the ball in its 38-17 win over the New York Giants.

But through the air, Wilson has been far from his best of late. And with the Seahawks entering their most difficult stretch of the schedule, it’s a concern whether Wilson can rediscover his passing rhythm.

“I think my accuracy has been a little bit off for whatever reason and I keep believing in myself. I’m not going to doubt myself,” Wilson said on Thursday.

“I’ve played a lot of great football at times and I just believe every time I get the ball in my hands something great is going to happen and that is never going to change. My confidence never wavers.

“Sometimes you go through a downward slump but as long as you find ways to win, that’s all I care about is finding ways to help our football team win and then once I get back in my groove, which hopefully will happen this week, I think it will be hard to stop us.”

In each of his past three games, and in four of the past five, Wilson has failed to have a passer rating higher than 77.5.

While he’ll never put up huge passing stats because of the style of Seattle’s offense, Wilson has thrown for more than 250 yards only twice all season.

“I think it’s important to look at the pass game as a whole. All of it works together,” Seattle offensive coordinator Darrell Bevell said. “There are things we can do protection-wise to keep him on the spot. There’s things we can do better running routes for him to be at the right place at the right time and frankly there are plays that he has to make.

“There are throws that he needs to make and I’m sure there are some in the past that he would like to have back. It’s a work in progress each and every week we try and go out there and improve.”

Even with his struggles of late, Seattle’s three straight wins have included moments where Wilson has proved to be the difference.

In Carolina, he led Seattle on an 85-yard drive in the final minutes, capping it with a pinpoint pass to Luke Willson for a 23-yard touchdown and another fourth-quarter comeback.

Against Oakland, Wilson led Seattle on two key first-half touchdown drives as the Seahawks built a 24-3 lead at the break.

And last week against the Giants, Wilson took advantage of New York’s inability to keep contain on the perimeter in the run game.

That’s been the good side of Wilson’s game lately. But the mistakes have become more profound and more obvious.

“I think some of the times it’s been footwork and sometimes maybe rushing a little too fast,” Wilson said. “I think one of my strengths is being poised at certain times and I think I have to go back to that, always being calm as possible and being as smooth as possible and making those throws and hitting it when it’s there.”

Against Oakland, Wilson’s accuracy was significantly off. It was the first time this season and fourth time in the past two regular seasons that Wilson completed less than 50 percent of his passes.

A number of times he was inaccurate throwing to open receivers and at least two throws could have been intercepted.

And against the Giants, there was an element of carelessness. Usually cautious with his passes, Wilson threw two interceptions for the first time in more than a calendar year.

“We have been running the football with more intent and so that which with we’ve been getting done is good enough to get wins,” Carroll said. “We have areas that we can improve, throwing and catching we can always get better. I really think the good thing is that we have won three games and we can do better.”

Lynch Appears on The League

The comedy The League on FX has featured a number of NFL players, the latest being Marshawn Lynch.

The show revolves around a group of friends and their fantasy football league.

Jeff Schaffer, co-creator of the show, said that it was tough to get Lynch on because he was dealing with an injury after the Rams game.

Schaffer told Lynch’s agent that he should just focus on healing but Lynch ended up coming in, about a week-and-a-half ago.

Turns out Lynch played a prank on his agent, telling him a story that involved missing his flight and then saying that when his uncle was driving him to the airport they got in a car accident.

But Doug Hendrickson, the agent, later called Schaffer and said that Lynch had arrived the night prior for filming and was just messing with him.

“So Lynch had gotten in the night before, didn’t tell his agent, decided to [expletive] with him, made up a whole story, and walked up right when he knew that the car from our production was going to pick him up and go to set,” Schaffer told Field Gulls.

“Just like nothing had happened. I’m so happy that he was just playing a prank on his agent, but he had almost given me a heart attack. So that’s how Marshawn came to set.

“He could not have been nicer. He was super friendly, super fun, just taking pictures with everyone in the crew. Other people from other productions were walking up, he was happy to take pictures with them. Super nice, had a blast, and very natural, very ‘in it’ and had fun. It was like a dream come true. He couldn’t have been nicer.”

Carroll Says No Interest in Moss

Coach Pete Carroll said that the team has no interest in Randy Moss.

Moss, 37, said this week that he’d consider coming out of retirement to play with Peyton Manning, and also said that the Seahawks had reached out to him.