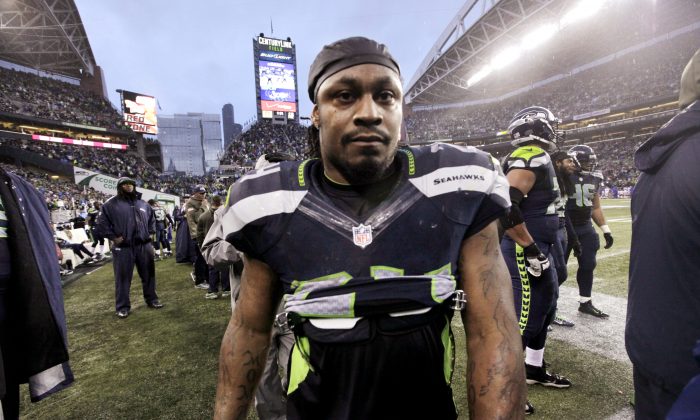 Seattle Seahawks' Marshawn Lynch heads to the locker room late in the second half of an NFL football game against the New York Giants, Sunday, Nov. 9, 2014, in Seattle. The Seahawks won 38-17. (AP Photo/Elaine Thompson)
NFL

The Seattle Seahawks demolished the Arizona Cardinals at home, and they face the San Francisco 49ers on Thursday in a pivotal matchup. Here’s some of the latest buzz:

Lynch talks to the media… kind of

RB Marshawn Lynch isn’t fond of talking to the media, but to avoid another $100,000 fine, he sat down and answered questions in his own special way.

He answered most of the questions with “yeah“–even when the question didn’t warrant such an answer.

When asked if he wanted to do a phone interview, he replied: “No.”

When he was asked what he was listening to, he replied: “Purple Juice,” which is a song from rapper Lil Boosie.

In an unrelated answer, he gave his most verbose response: “I got a foundation called Edgewater, on Dec. 14, to help benefit inner city youth in Oakland. We are trying to raise money to build a youth center.”

QB Russell Wilson said that he feels the Seahawks are back on track following their victory over the Cardinals.

He said that players “were talking about getting our swagger back,” reported Q13.

“I feel like we got it back,” he said, adding that there is “no doubt in my mind that we can do it” and win the NFC West again.

Lynch’s backup Robert Turbin told a story about Lynch and why he’s beloved by his teammates.

Via The Seattle Times, he said that Lynch handed him the ball after his third touchdown a few weeks ago versus the Giants.

“I don’t know why,” Turbin said. “But he told me, ‘I want you to have this ball. It’s for us. It’s for the running backs, the group, a representation of how we go about our business on a daily basis.’ For whatever reason, that one particular touchdown meant a lot to him, and he wanted me to have it.”

“In the grand scheme of things, you guys might not understand it. I had a conversation with him, so I know exactly why he did that. Turbin and Christine Michael will understand it when Marshawn is gone, but he does things for a reason. Yes, it is truly heartfelt. But that situation right there epitomizes Marshawn Lynch.”

“I don’t understand him, either,” Turbin added. “He’s not supposed to be understood. That’s what people have to understand about him and a lot of guys in this locker room. The reason why we’re here is because we’re different, and the reason that makes him so good is because he’s so different, with his own way of thinking and his own mindset. He’s not about how it’s supposed to be, quote-unquote.”

Other teammates chime in

“I like to say he’s out of the ‘Matrix’ because everybody is in (there) with Twitter and Instagram and all that stuff,” defensive lineman Michael Bennett told the Times.

“He’s just so out of it, on his own wing, and it seems like he’s just different. Or maybe everybody else is just wrong. You know what I mean? If more people cared less what other people thought of them, how much better would the world be?”

“I think if a lot more people were like him, the NFL would be a better place,” Bennett added.

Baldwin added: “From Little League to high school to college to the pros, he’s the best teammate I’ve ever been around.”

Cliff Avril said, “Shawn is one of the coolest teammates I’ve ever had.”