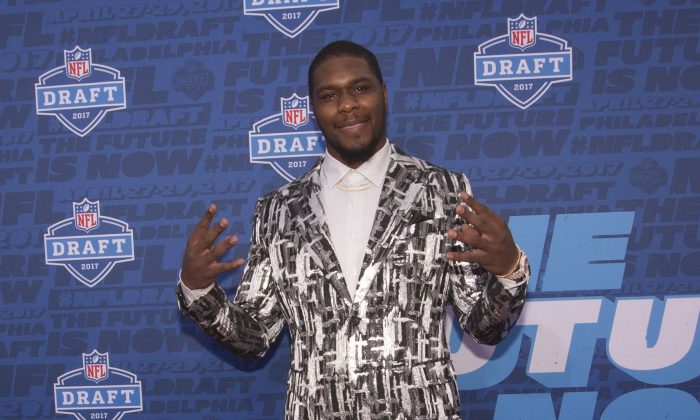 Malik McDowell of Michigan State poses for a picture on the red carpet prior to the start of the 2017 NFL Draft in Philadelphia, Pennsylvania on April 27, 2017. (Photo by Mitchell Leff/Getty Images)
Entertainment News

McDowell hasn’t played a snap this season after he injured himself in an ATV accident over the summer.

McDowell, 21, was arrested after he allegedly “flipped out at a club in a dispute over money,” TMZ said.

He was arrested in Atlanta, Georgia, after a police officer said she saw him in a verbal dispute outside a club.

McDowell was yelling at the “head of security about $600 he believed he’d already paid,” the report stated. It added that he was allowed back inside the club.

“The arresting officer says he was kicked out again … still shouting about the money, and refusing to leave without it. The cop says she was told McDowell poured out a couple bottles of liquor inside and got booted,” said the report.

As police were putting him in the back of the squad car, he unleashed a profanity-laced tirade, saying, “I bet I get out, I got more money than ya’ll, ya’ll ain’t got enough money for me.”

He was taken in for disorderly conduct before he was released on $325 bond.

A Seahawks spokesman told the Seattle Times on Sunday afternoon that team had no comment on his arrest.

The report noted that McDowell “liked” TMZ’s tweet of its report on his arrest.

Seattle coach Pete Carroll said he’s optimistic that McDowell may have a chance to return to the team this season, according to the Times, but he said late in November that there’s no chance now.