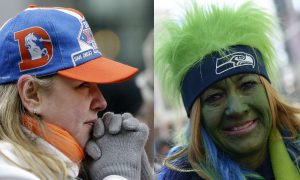 Super Bowl XLVIII: Getting Ready for the Game
0 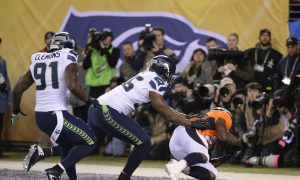 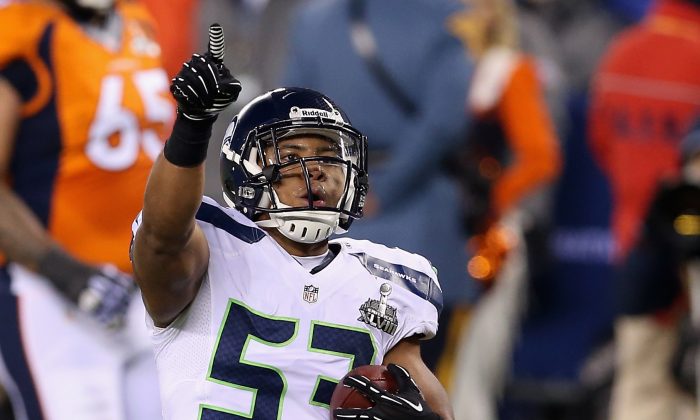 Malcolm Smith #53 of the Seattle Seahawks celebrates running back an interception off Peyton Manning of the Denver Broncos during the second quarter of Super Bowl XLVIII. (Christian Petersen/Getty Images)
NFL

Seattle Seahawks in Control, Denver Broncos in Need of a Miracle at Halftime Super Bowl XLVIII

Apparently the Seattle Seahawks were not reading the papers or watching the TV analysts, as they came out in the first quarter of Super Bowl XLVIII and steamrolled the Denver Broncos.

Most of those predictions were based on the dominating presence of Peyton Manning, and ultimately, Manning was the deciding factor: with two interceptions and no TDs, the Broncos signal-caller led his team nowhere in the first half.

Most experts seemed to think Manning’s arm and ability to call audibles would neutralize the Seahawks’ top-ranked defense, but Manning and company finished the first quarter with a safety, a three-and-out, and an interception.

After holding the Denver Broncos’ offense to two-and-a-half minutes on the field in the first quarter while scoring eight points of their own, the Seattle Seahawks opened the second quarter with a rushing touchdown by Marshawn Lynch, giving the ‘Hawks a 15–0 lead.

Denver didn’t get its first first down until a third of the way through the second quarter, followed three plays later by another.

Manning didn’t seem to be playing field marshal; instead of audibling he mostly came to the line and ran the ready play. His play-calling worked, and the Broncos started making gains, but almost every third down was a tough conversion, made by inches.

After racking up a few first downs, Manning started to settle into his rhythm, calling audibles, moving players around before the snap, but every yard was tough—until, on third and 13, Manning’s arm was hit while passing; linebacker Malcolm Smith grabbed the floating ball out of the air and ran it 69 yards into the Denver endzone—22–0 Seattle with 3:36 left in the half.

Peyton Manning floated quite a few passes (including the first pick) in the first two periods. It was not until the final drive of the half that he started throwing like someone who had set a record for completions and yards in the regular season. But that didn’t last long, and the Broncos gave up the ball on downs, unable to convert a third-and-two.

Seattle’s offense out-played the Denver defense, and the Denver offensive line was not able to give Manning the time he needed.

Football is played in two halves, and a team’s whole attitude and performance can change in the locker room.

Denver desperately needs to get its act together between halves. Otherwise, Seattle will continue to embarrass the best offense in NFL history, and will end the season wearing Super Bowl rings.