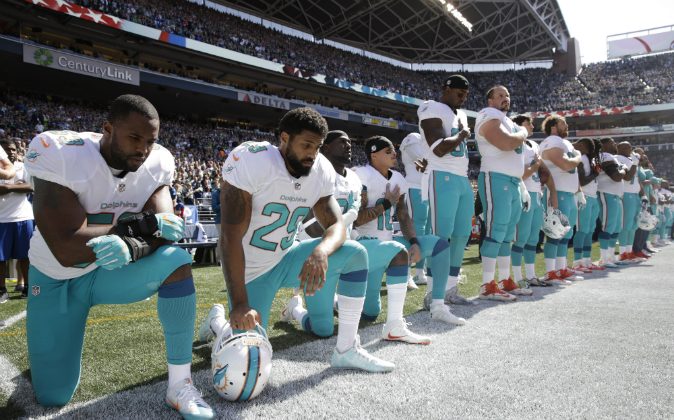 The Seattle Seahawks and Miami Dolphins weren’t only on opposing sidelines during their game on Sunday—but also in their respective styles of protest.

Dolphins running back Arian Foster and his three of his teammates—wide receiver Kenny Stills, safety Michael Thomas, and linebacker Jelani Jenkins—took a page out of San Francisco 49ers quarterback Colin Kaepernick’s book and knelt during the playing of the national anthem. The rest of the Dolphins roster stood.

However, the Seattle Seahawks took a different approach by standing and interlocking their arms together during the pregame demonstration.

Some social media users—including model Kate Upton—lambasted Dolphins players for their timing to not stand during the “Star Spangled Banner,” since Sunday marked the 15-year anniversary of the Sept. 11, 2001, terrorist attacks.

For Foster, there is no such thing as perfect timing and he believed his actions were fitting given the climate of the United States.

“They say it’s not the time to do this. When is the time? It’s never the time in somebody else’s eye, because they’ll always feel like it’s good enough,” Foster said following the 12-10 road loss to the Seahawks at CenturyLink Field.

“And some people don’t. That’s the beautiful thing about this country. If somebody feels it’s not good enough, they have that right. That’s all we’re doing, exercising that right,” he added.

According to Foster, those who are in opposition to his and Kaepernick’s stance are angry over the message and not the act of protest itself.

“It’s not about the symbology that people are mad about. It’s the message and the people who are saying it,” Foster said. “Because if it’s a knee that people are upset about, every Sunday people of faith take a knee to give thanks to their Lord and savior, whatever religion they are.”

The Dolphin players had the support of team owner Stephen Ross, who said he was “100 percent supportive of them.”

The Seahawks’s choice to stand and link arms was a “demonstration of unity,” said wide receiver Doug Baldwin.

“We are a team comprised of individuals with diverse backgrounds. And as a team, we have chosen to stand and interlock arms in unity,” Baldwin said in a video posted on Twitter on Sept. 10. “We honor those who have fought for the freedom that we cherish and we stand to ensure the that the riches of freedom, and the security of justice for all people.”

There has been varying opinions regarding 49ers quarterback Kaepernick’s decision to not stand during the national anthem. NFL Commissioner Roger Goodell said he opposed Kaepernick’s actions, while President Obama said the quarterback was “exercising his constitutional right” not to stand, while describing the protest as “messy.”

Kaepernick’s political stance has led to a boost in his jersey’s sales, becoming the top selling jersey in the league.