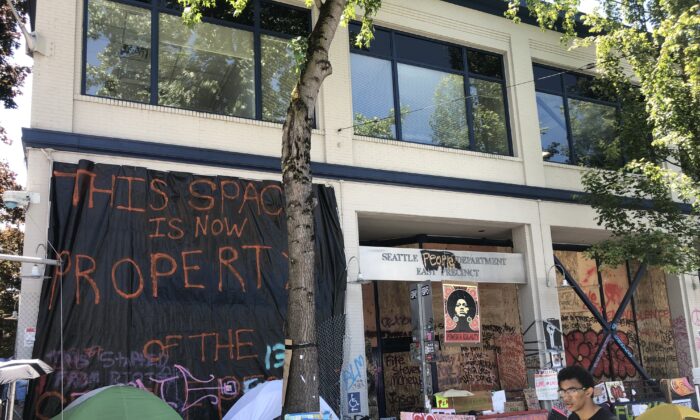 Seattle police officers falsified a report of armed Proud Boys members heading toward the autonomous zone in the city in 2020, a watchdog found.

The Seattle Police Department abandoned a precinct on June 8, 2020, and activists soon after established an armed protest zone in the area known by some as CHOP.

That same day, officers over the radio said armed members of the Proud Boys, a right-wing group that has clashed with members of the far-left Antifa network, were heading towards the area where the autonomous zone cropped up.

“We’re going to be the one taking my group down around city hall to monitor the group of the Proud Boys gathering right now,” one officer told a dispatcher.

“Small group, possible Proud Boys. It looks like a few of them might be open carry,” another said.

A third officer later said one of the group was carrying a gun and that the group “is very boisterous tonight.”

“Hearing from the Proud Boys group. They are not very happy with the response in the audience. They may be looking for somewhere else for confrontation,” the first officer said.

According to a journalist who was in the autonomous zone, the string of communications prompted many people to go grab firearms and the event transitioned from being peaceful to something entirely different. However, video footage from the scene showed at least some individuals already armed.

Interviewed by the Seattle Office Police Accountability, the officer credited with coming up with the effort said officers put forth “misinformation” because they knew they would be overheard.

“[There was] no intent to put any kind of false narrative out there, as far as like Proud Boys, or anything, that was not the guidance that I gave to those. I just wanted to see if that was something that would, that could actually work, but it was all more routine kind of movement, you know, we’re going to go here to there, let’s deliver food, let’s do that kind of stuff like that, just to kind of see what the reaction would be,” the officer, who was a captain at the time, told investigators (pdf).

The officer, who has since retired, said he did not believe the transmissions prompted people in the autonomous zone to grab weapons, adding that officers had already been injured by armed people there.

A second officer, who was already retired when interviewed, said the captain had asked him to “organize some folks that could broadcast anything that was mundane and kind of focus some attention on a location different than where the main police and protest interactions were happening.”

He said including the Proud Boys was part of making the ruse “seem realistic.” But the first officer claimed using the group went against the guidance he gave to his colleague.

Former Police Chief Carmen Best appeared to be unaware of the plot, investigators said. The assistant chief of patrol operations said he knew of the misinformation effort but did not know the Proud Boys were mentioned.

“Given the volatility situation, I think everyone is trying to do the best they could try to resolve a very complex situation, very dynamic circumstances, again, there’s no attempt to instill fear or create alarm, I think, really, the goal was to try and without using force, move the crowd or get the crowd somehow distracted away from the precinct so potentially we could take the action to reoccupy the space,” the assistant chief said.

The Seattle Office Police Accountability attributed responsibility for the ruse to the captain, who it said abused law enforcement discretion by not providing sufficient guidelines, not adequately supervising it, and did not document any part of the effort.

The second officer also bore responsibility, the watchdog said. The officers who carried out the fake broadcast did, too, but the watchdog removed the allegations against them, blaming their supervisors for what happened.

A Seattle police spokesman told The Epoch Times that the findings have not been reviewed by the chain of command or Police Chief Adrian Diaz. He declined further comment.

The autonomous zone was eventually ordered disbanded after multiple shootings took place. The city was sued by several people over allowing the zone to remain in place.