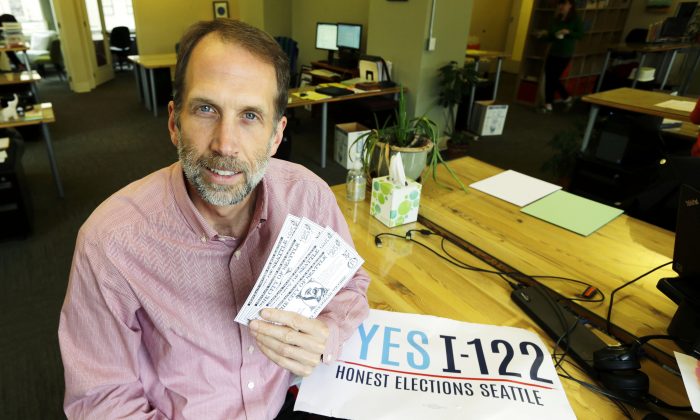 Alan Durning, author of an initiative passed by Seattle voters that created the nations first voucher system for campaign contributions, poses for a photo in his office in Seattle while holding an artist's depiction of a possible design for the vouchers, on Nov. 12, 2015. (AP Photo/Ted S. Warren)
US

SEATTLE—Many voters don’t have the money to donate to political candidates or don’t care enough to bother. But what if the government gave them $100 to dole out as they saw fit?

That’s the experiment underway in Seattle after voters this month adopted the nation’s first voucher system for campaign contributions. The idea is to get those who don’t normally donate more involved in politics as a way to counteract the influence of big corporate donors and wealthy individuals.

“We’re very eager to see how it works,” said Michael Malbin, executive director of the Campaign Finance Institute in Washington, D.C. “One of the major problems people have with the political system is that it’s financially controlled by too few people. Nothing’s going to stop wealthy individuals from making independent expenditures, but those will be less powerful if more people are engaged.”

The U.S. Supreme Court has chipped away at restrictions on political donations, including in the 2010 Citizens United case, which allowed unfettered independent spending by corporations and unions.

Critics of the court’s decision see local efforts to strengthen the public financing of campaigns as a step toward blunting the effect of such rulings. Voters in Maine this month passed a measure to strengthen their 1996 campaign finance law by making additional public money available to candidates running for governor and the Legislature.

Seattle’s voters decided to tax themselves $3 million a year—$6 million for each two-year election cycle—in exchange for four $25 vouchers that they can sign over to candidates for mayor, city council or city attorney, beginning with the council and attorney elections in 2017 and the mayor’s race in 2021.

To be eligible to redeem the vouchers, candidates must collect a threshold number of small-dollar donations and agree to strict spending limits, private contribution limits and participation in at least three debates. The measure, which also bars political giving by some city contractors, passed with 63 percent of the vote.

The concept of campaign contribution vouchers dates to at least 1967, when U.S. Sens. Lee Metcalf of Montana and Russell Long of Louisiana each proposed versions for financing federal elections. Congress instead opted to let voters check a box on their taxes to donate $1 toward the public financing of campaigns.

Since then, many cities and states have adopted some form of voluntary public financing, including Minnesota, which allows voters a $50 tax rebate if they contribute to candidates or political parties that adhere to spending caps.

Seattle’s law takes another approach, one election reformers hope to replicate around the country.

David Donnelly, president of Washington, D.C.-based Every Voice, which supported the proposals in Seattle and Maine, said he expects as many as eight states to consider ballot measures such as voucher systems or matching funds for small dollar contributions in 2016. Efforts are underway to put voucher systems on the ballot in South Dakota and Washington.

“There are people all over the country that are seeing these examples as beacons of hope to take big money out of politics and engage regular people in elections,” Donnelly said. “It’s an incredible, democratizing policy.”

Seattle’s measure has its detractors.

Robert Mahon, a former chairman of the city’s Ethics and Elections Commission, argues that by restricting city contractors from donating and by lowering campaign contribution limits—from $700 to $500 for mayoral candidates and $250 for council candidates—the law will push more money into independent expenditures, worsening the problem of “dark money” in elections.

“I fear it sets back the cause of campaign finance reform,” he said.

Mahon and others also suggest that the release of the vouchers early in each election year will benefit incumbents and well-known candidates with political machines ready to start collecting them. They say the $6 million that Seattle’s property tax will raise won’t be nearly enough to cover vouchers for all 419,000 registered voters.

Even supporters expect that only about 14 percent of the vouchers could be redeemed before candidates hit their spending caps.

Further, the law has a spending cap escape clause: Candidates who are the target of independent expenditure campaigns can petition to be released from their spending limits, enabling them to raise and spend more private money.

Alan Durning, a founder of Seattle’s Sightline Institute and an author of the initiative, called those arguments a stretch. Incumbents already have advantages and giving lesser-known candidates public funding can only help make them more viable, he said. Candidates would never participate if they didn’t have an escape clause to defend themselves from big-money attacks, he said.

Further, just 1.5 percent of Seattle voters made political contributions to local candidates in 2013. If the voucher system increases that participation tenfold or more, it’ll be a great problem to have, he said, one that can be fixed by adjusting the value of the vouchers or the number issued.

“If we have the good fortune of voters being more eager to use vouchers than we expect, we can adjust the system,” Durning said.