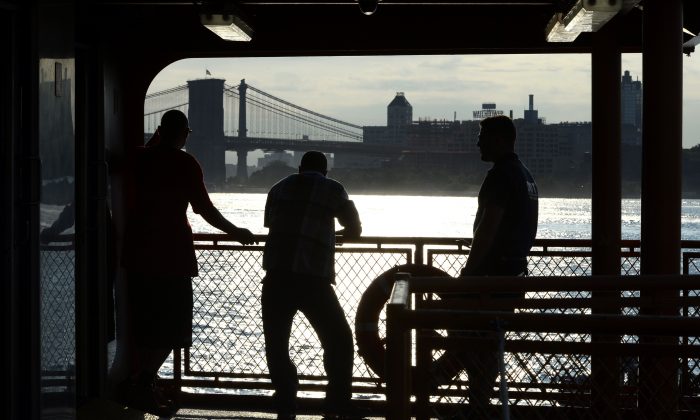 With the Brooklyn Bridge in the background, commuters on the Staten Island Ferry watch the morning sunrise in the New York Harbor in lower Manhattan, on July 11, 2014. (Timothy A. Clary/AFP/Getty Images)
New York

NEW YORK—The Staten Island ferry system is set to get a multi-million dollar upgrade to its aging and heavily used fleet. The Seattle-based Elliot Bay Design Group (EBDG), an employee-owned company with offices in Seattle, Alaska, and New Orleans will design three new ferries for the system.

Though a representative for the firm said that the amount they will be paid for the contract is yet to be determined, the city’s Department of Transportation will spend just over $300 million to build the final products.

EBDG is considered a leading naval architecture and marine engineering firm that has done extensive work designing ferries, including work with the state of Washington’s extensive ferry system. Their work for New York City will include designing boats to replace two existing classes of ferries and retrofits for a third class of ferries.

The city’s ferries have drawn new interest in post-Superstorm Sandy considerations for storm preparedness. Following a disaster of Sandy’s magnitude, the quickest and most reliable form of transportation are ferries, as long as a stable landing is available.

According to EBDG, they have designed more ferries than “any other firm in the U.S.”