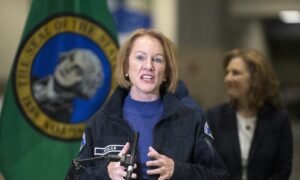 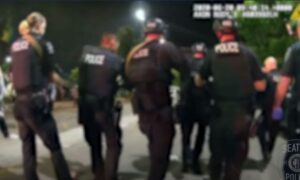 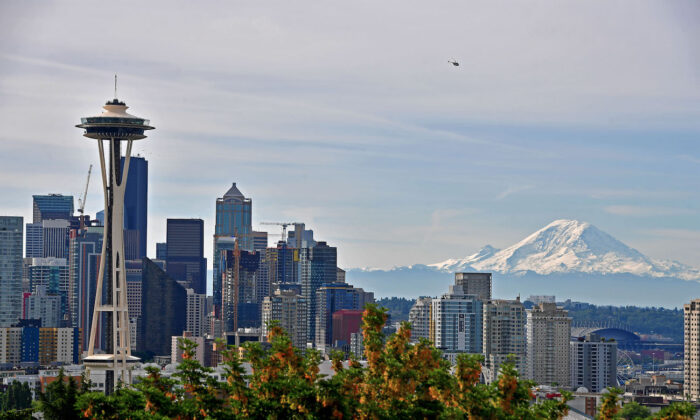 A general view of the Seattle Skyline and Mount Rainier from Kerry Park in Seattle, Washington, on June 9, 2019. (Donald Miralle/Getty Images for Rock'n'Roll Marathon)
Social Issues

The twin bills will go next to Mayor Jenny Durkan for signing, but a spokesperson said the mayor had not yet had the opportunity to review the legislation, according to The Seattle Times.

The bills seek to drop ordinances from the Seattle Municipal Code (SMC) that help address loitering by suspected drug dealers and prostitutes.

The Seattle City Attorney’s Office has filed fewer than 300 charges on both drug traffic loitering and prostitution loitering counts since 2009, according to an analysis by The Seattle Times.

The Seattle Reentry Workgroup, a workgroup convened by the city mayor and the Seattle Office for Civil Rights to develop policies and strategies to help formerly incarcerated individuals reenter society, recommended the ordinance repeal in 2018. The group’s 2018 report (pdf) said that the “City Council should remove drug traffic loitering and prostitution loitering from the City’s criminal code.”

Lewis said in a statement that the drug traffic loitering ordinance “has a racist history and historically criminalized ‘hanging out’ simply because someone looked like they were trafficking drugs, allowing racial profiling and the criminalization of communities of color.”

“We’re in a different time where lawmakers are no longer participating in ‘war and drugs’ policies, and instead looking at drug addiction through a public health lens,” Lewis added.

A Seattle council announcement on June 15 reads, “The Drug Traffic Loitering law was adopted in the 1990s in response to the War on Drugs and an incarceration-centric handling of drug use and trafficking.”

“An arrest for Drug Traffic Loitering would occur when a suspect was in a public place and was thought to be soliciting another person to violate felony drug laws, but when apprehended, did not have drugs in their possession,” the announcement continues. “Without evidence of the underlying offense, the police would instead arrest a person for loitering.”

In a separate announcement on the Seattle Council’s website on June 22, Lewis said that the prostitution loitering ordinance “has a discriminatory legacy that impacted primarily people of color, women, and our LGBTQ community.”

Morales said in a statement that by repealing the city’s prostitution loitering ordinance, “we are assured that drug offenders and sex workers will be treated humanely and not criminalized.”

The Seattle Reentry Workgroup’s 2018 report said that the city’s prostitution loitering ordinance “targets individuals in the commercial sex industry, a group already at high risk for trafficking, abuse, and other exploitation.”

The workgroup contends that bringing such people into the criminal legal system “will only exacerbate any underlying unmet needs and exposes them to further physical and sexual harm caused by incarceration.” The group said in its report that in other cities with similar ordinances, “data has shown that these ordinances disproportionately impact” people of color.