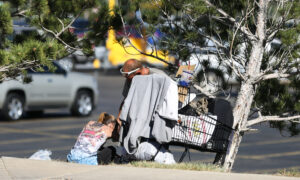 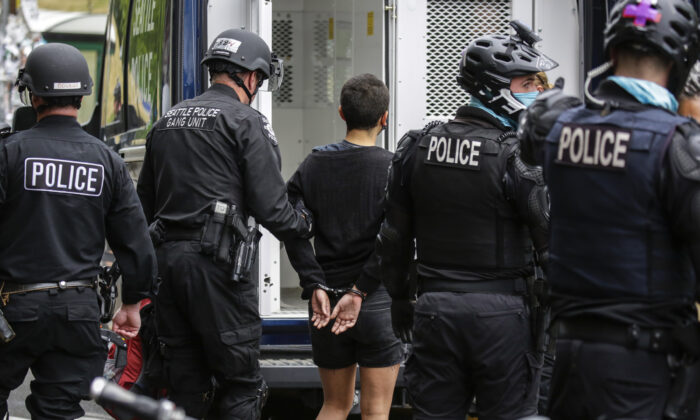 Seattle Police arrest a woman after demonstrators blocked the intersection of East Pine Street and 11th Avenue following the clearing of the Capitol Hill Occupied Protest (CHOP) by police in Seattle, Wash. on July 1, 2020. (Jason Redmond/AFP via Getty Images)
US News

The Seattle City Council on Monday voted to slash police funding by 18 percent as part of the city’s 2021 budget, while channeling millions to community programs, according to officials and reports.

The adopted budget cuts over $30 million from the Seattle Police Department (SPD), including by moving parking enforcement and 911 dispatchers outside the department, according to the Seattle Times.

“The budget reduces the size of SPD’s sworn force, transfers functions from SPD that are better performed in a more civilianized practice and makes short-term reductions to SPD’s budget in response to the COVID-19 pandemic,” the budget proposal states (pdf), noting a reduction in the number of sworn officers from 1,422 down to 1,400.

“As community-led alternative responses are developed, the size of the force and appropriate response will be continually examined,” the proposal notes.

Councilmember Teresa Mosqueda, chair of the Budget Committee, wrote in a statement that “we’ve crafted a 2021 Budget that invests in what we need most—affordable housing, public health measures, community safety, the environment, and economic recovery.”

“For the first time, the City’s budget will invest $100 million directly in communities of color, and these investments will center and be determined by Black and Indigenous communities,” Durkan said in a statement.

Activists cited by local news outlet KING5 called the move a win, though they had been pushing for a 50 percent cut to the police force.

Nationwide protests over the summer that called for cities to defund the police prompted many Seattle councilmembers to propose a 50-percent reduction in police funding, a move that led then-Police Chief Carmen Best, the city’s first black police chief, to announce her retirement.

Seattle’s mayor hailed the council’s decision not to cut as deeply into the police force as some members earlier called for.

“I applaud the City Council for taking a more deliberate and measured approach to the 2021 Seattle Police Department budget than occurred this summer which led to the resignation of former SPD Chief Carmen Best,” Durkan said in a statement.

Seattle has struggled with a rise in anti-police sentiment, with demonstrators occupying a portion of the city for weeks over the summer.