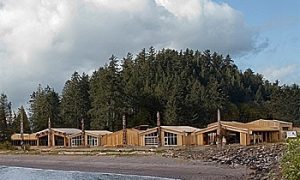 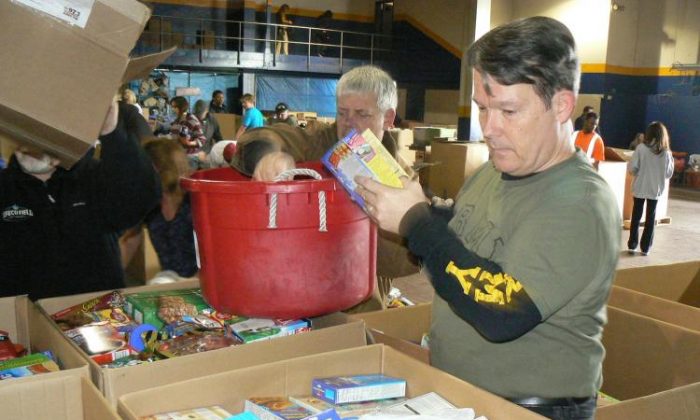 Goods that filled the 40,000-square-foot warehouse are estimated to be enough to fill 12 semi-trucks. (Burke Long)
US

By Genevieve Belmaker
Print
TACOMA, Wash.—A food and goods drive that began in late March for Japanese orphans impacted by the earthquake and tsunami reached a fever pitch on Friday. Radio deejays Ron Upshaw and Don O'Neill, of Seattle’s Ron and Don radio show, started the drive through their program. They coordinated donations and oversaw the final sorting and packing of goods and food last week, which was enough to fill a 40,000 square foot warehouse.

The drive started in March when the deejays were tipped off by a listener that Bikou-En Orphanage, which does not rely on government support like most Japanese orphanages, was struggling. The orphanage, which is normally home to 68 children ages 2 to 17, started turning orphans away after the earthquake and tsunami there. They are now helping 436 kids.

According to the radio show, when the drive for goods started, the orphans were within days of running out of food and supplies.

"We're going to send these young orphans a tsunami of love, care, and compassion," Don O'Neill told volunteers at the warehouse on Friday.

A local woman, now stationed with her husband at a U.S. air base in Misawa, Japan, called the KIRO radio station to tell them about the situation.

"She asked if I could make mention of the fact that due to the earthquake and tsunami there were now all these new orphans and they had nothing,” said O’Neill. “No food, water, blankets, or clothing other than what they were wearing."

O'Neill said he went on the air and told his listeners about the phone call, hoping it would result in a few boxes of donations to send to the orphans. He didn't anticipate the outpouring of support.

"The next morning I had over 800 e-mails from people who wanted to help," he said. "In just over two weeks it mushroomed into what you see here now."

Donations included everything from clothes, blankets, sleeping bags, spam, jars of peanut butter, and pallets of bottled water. Some items were purely morale-boosting, including handmade quilts and a package of cards from area third-grade students.

Listeners of the "Ron and Don Show" and other volunteers went to the warehouse on Friday to help pack the boxes, in what has been dubbed Ron and Don Operation Airlift Japan, or "OAJ" as they call it. The final tally was 400 pallets of goods that weighed 200,000 pounds. It was enough to fill 12 semi-trucks.

Fred Van Huven, a retired Marine, said he volunteered because he was a pilot for Northwest Airlines for 23 years, and mostly flew to Japan. He got to know and befriend many people there, and said he has a tremendous affection for the Japanese people and their culture.

Van Huven said on a personal level that his father fought in World War II and was captured by the Japanese and held in a prisoner camp for over two years. His father had a deep hatred for the Japanese after being freed, but as time wore on he and the whole family began to lose that hatred. Van Huven said helping with the drive for the orphans was his way of saying that "time had moved on, things change, and life goes on."

Patricia Ferguson said she volunteered because she couldn't stand to sit idly by and not help.

"My husband and I had the TV on when the tsunami struck Japan," said Ferguson. "When I first saw those terrible images I thought my husband was watching a Hollywood movie. I just couldn't imagine seeing entire homes and buildings washed away like that. We have no idea how much those people are suffering. I just had to help."

Other participants who helped sort goods and unload delivery trucks to the warehouse included inmates from the Washington State Department of Corrections and the area sheriff's department. All of the prison inmates were volunteers.

Ron Upshaw said he thinks so many people wanted to help because it was a real way to get involved.

"This is something more tangible for people to do rather than texting $10 on your phone," said Upshaw. "People want to do something that's personal."

He added that Washington state residents know from their own experience how devastating a natural disaster can be.

"We live in a major earthquake zone ourselves," said Upshaw. "We have two active volcanoes in our backyard. People understand that someday it might be us needing this kind of help."

The operation is now working on finding a corporation or military plane to fly the goods to Japan. They estimate there will be more than enough pallets to fill a C-17 cargo jet.

Wednesday will be a final sorting and packing day at a local car dealership that is helping in the drive. Surplus and late donations will be donated to two area organizations that do community assistance work.

With additional reporting by Burke Long