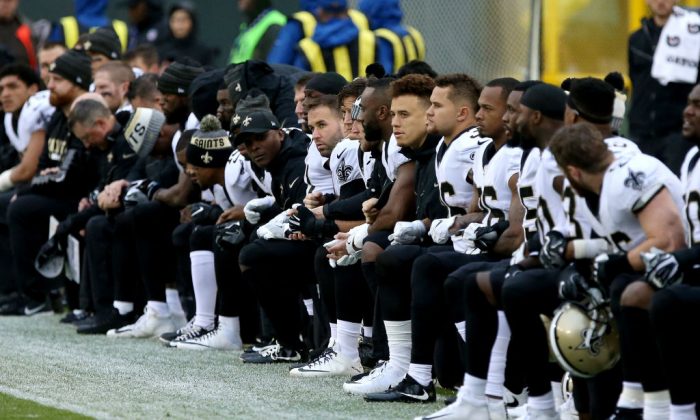 The New Orleans Saints kneel before the playing of the national anthem before the game against the Green Bay Packers at Lambeau Field on Oct. 22, 2017, in Green Bay, Wis. (Dylan Buell/Getty Images)
Entertainment News

A New Orleans Saints fan who is also a season ticket holder sued the team for the reimbursement of the ticket prices as well as lawyer fees after Saints players took a knee during the national anthem.

Lee Dragna, the fan, claimed in the lawsuit that he had purchased the tickets for “entertainment and intellectual enjoyment” for his family and himself and said he would not have purchased them if he knew players would “use Saints football games as a platform for protests,” ESPN reported.

A source said the Saints are “taking this very seriously, and this fan best have his facts in order,” ESPN reported.

“The Saints will come back at this fan who has brought forth incorrect information in his statement with everything to defend the team, organization, and players,” the source added.

Saints running back Mark Ingram responded to the lawsuit on Twitter.

“The one time we protested an anthem was an away game. After a team meeting we decided to kneel as one BEFORE the anthem was played and STAND united as one DURING the anthem! Good luck dude,” he wrote.

The one time we protested an anthem was an away game. After a team meeting we decided to kneel as one BEFORE the anthem was played and STAND united as one DURING the anthem! Good luck dude ✌? https://t.co/28huwGP0Pu

Ingram and nine other Saints players sat on the bench in Week 3 during an away game at Carolina after President Trump made comments about the NFL and the protests. As ESPN noted, after that week, Saints players have knelt before the anthem and then they stand as the anthem plays.

Dragna, of Morgan City, Louisiana, filed a lawsuit Monday in the 24th Judicial District Court in Gretna, The Advocate reported.

He alleged that some players didn’t come out for the singing of the national anthem when the Saints played the New England Patriots on Sept. 17. “They passed directly in front of where the petitioner and his guests were seated. Many of the fans in that area booed and cursed at the Saints players,” he said, describing the scene when they emerged from the tunnel.

“Apparently, these players were following the lead of (former San Francisco 49ers quarterback) Colin Kaepernick by disrespecting the flag, the anthem, the USA and those who have served and are serving the USA in our military,” the suit read.

He then said the rowdy, angry reaction of the people near his seats made the season tickets unusable by him and his family—as well as customers he’d give the tickets to, the Advocate reported. He alleged that behavior by some fans upset by the protesting was “borderline dangerous.”

And Dragna made it clear that he’s not supportive of the protests.

“I don’t want my kids growing up thinking that those are their heroes … and it’s OK to do that stuff, especially on TV and especially on your job site,” he said. “That can’t be allowed to happen.”

Dragna said he asked for a refund of his tickets, but the Saints rejected him.

“They don’t even want to talk about this, but I don’t care,” he told the Advocate. “One way or another they’ll pay.”