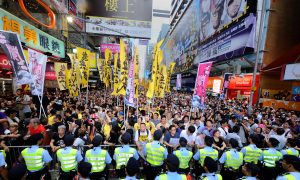 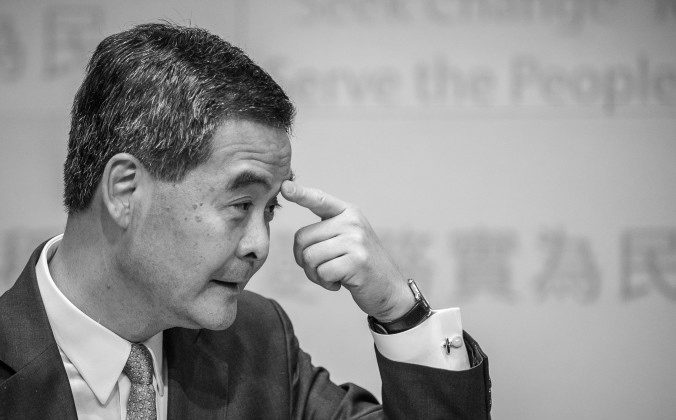 In this file photo, Hong Kong chief executive Leung Chun-ying is seen at a press conference following his maiden policy speech, in Hong Kong on Jan. 16, 2013. Democracy activists in Hong Kong are accusing Leung of using members of the mafia to try to intimidate them. (Philippe Lopez/AFP/Getty Images)
China

HONG KONG— On Aug. 18 one thousand Hong Kongers, with groups from all the major democratic parties and several Legislative Council members among them, lined both sides of Hong Ning Road outside the secondary school where chief executive Leung Chun-ying would meet some 280 Hong Kong citizens. The protesters had come to demand Leung’s resignation, to try to heal a city they feel is being torn apart, and to serve notice that they would not be cowed.

A week before, on Aug. 11, Leung Chun-ying had held another meeting to “gather citizens’ opinions” and the scene outside the Tin Shui Wai Community Hall had dissolved into chaos. Individuals, some of whom had the tattoos and golden-dyed hair characteristic of members of the triad—Hong Kong’s mafia, randomly grabbed protesters and beat them.

Two days later, on Aug. 13, Hong Kong’s Ming Pao newspaper published an interview with the man identified as the main organizer of Leung’s supporters at the Aug. 11 event. Tsang Shu-wo, chairman of the Ping Shan Rural Committee, had been arrested during a previous police crackdown on gangsters.

Tsang told Ming Pao, “We desperately want to have bloody confrontations” and in doing so “awaken Hong Kong citizens.”

According to a source familiar with the matter, the front-page interview with Tsang was ordered by Chinese Communist Party powerbroker Zeng Qinghong. Zeng Qinghong is a former member of the Politburo Standing Committee who for a long time held the Party’s portfolio for Hong Kong. He is known to be Leung Chun-ying’s mentor and has been calling the shots behind the scenes.

According to the source, the story in Ming Pao and the use of mobsters to beat protesters were meant to send Hong Kongers a warning: don’t protest, don’t speak out, stay home.

Other threats have been delivered. On June 19, vandals destroyed the iron gate to the residence of Jimmy Lai, the owner of the independent Next media company, which often reports aggressively—and honestly—on the CCP. An ax and a knife were left at the entrance to Lai’s home.

More recently, a campaign has been directed at the individual who this summer has come to symbolize Hong Kongers speaking out: the primary school teacher Ms. Lam Wai-sze.

She accused the police of doing nothing to protect freedom of speech and spoke of her disgust with the Youth Care Association, of how “extremely evil” the CCP is, and how “the CCP’s killing people to harvest their organs for sale is known to the entire world.”

However, a video published by pro-CCP media outlets of Lam using one English and two Cantonese curse words appeared and became the basis of a campaign mounted against her by pro-CCP groups.

Media outlets inside Hong Kong and in the Chinese diaspora overseas that are known to be controlled by or influenced by the CCP have published a steady drumbeat of articles denouncing Lam.

The World Journal, for instance, has since Aug. 3 carried 10 news reports that focus on the curse words Ms. Lam used, while ignoring the substance of her remarks. The title of one article—“Denouncing Yelling Profanity in Cantonese—Lam Wai Sze Suspected of Escaping Accountability”—gives a feel for the paper’s editorial line

On Aug. 11, at his event for meeting the citizens, Leung Chun-ying inserted himself into the controversy, calling for Lam to be investigated by the education department. Video of his remarks was then posted on his official website.

Large banners have been left at her school calling for her dismissal.

Hong Kongers have believed that the attacks on Lam have been a threat to their own rights.

Hong Kong Legislative Council member Claudia Mo told Voice of America that someone had “obviously exaggerated the [Lam Wai-sze] incident infinitely, and in the end tried to attack democracy and the democratic activists. They tried to make the generalization that those who seek democracy are violent, shouting and acting indecently.”

The editor of Hong Kong’s Open magazine, Ms. Tsai Yung-Mei, said, “The way in which local media, followed by overseas media, took turns vilifying Lam Wai-sze shows their actions were a coordinated effort by the CCP, a cohesive government action, not a voluntary action, for the sole purpose of silencing those who speak up for justice.”

Since July 14 Hong Kongers have supported Ms. Lam in several rallies. On Aug. 18, however, the focus of rally was no longer on her case, but on the situation of Hong Kong itself.

The crowd chanted slogans condemning Leung Chun-ying’s use of the triads, demanding he step down, and saying “down with the Communist Party.”

Legislative Council member Alan Leong Kah-kit emphasized that the aim of this protest was to ask Leung Chun-ying to step down.

“It is a simple message, ask him to stop tearing Hong Kong apart, Hong Kong will not accept this type of persecution,” Alan Leong Kah-kit said.

Commenting from Washington, D.C., China analyst Shi Cangshan said, “the incident of Hong Kong teacher Ms Lam exposed the fear of the CCP. Driven by fear, the CCP went to war…[The CCP] fears deeply that the Hong Kong people will launch a round of large-scale protests and prompt a sudden change in the politician situation in China.”