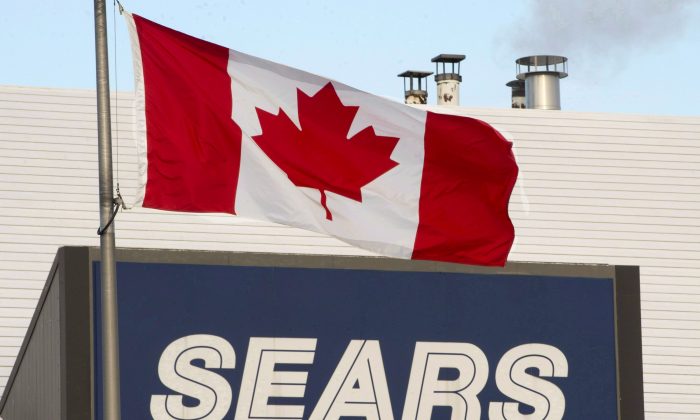 A Sears customer call centre in Montreal. Sears is considering selling its Canadian operations, a move that will likely lead to the closure of its brick-and-mortar stores in this country and make room for a new retailer to enter the market. (The Canadian Press/Ryan Remiorz)
Business & Economy

TORONTO—Sears is considering selling its struggling Canadian operations, a move that will likely lead to the closure of its brick-and-mortar stores in this country and make room for a new retailer to enter the market.

The U.S. parent company, owned by Sears Holdings in Chicago and controlling shareholder Edward Lampert, said Wednesday it was looking at strategic options for its 51 percent interest in Sears Canada, including the possible sale.

While Sears Canada says it will co-operate with the Sears Holdings review and insists its Canadian stores will continue to operate as usual, observers see the move as the beginning of the end.

“I’m not sure that we’re going to have the Sears brand in Canada because I’m not sure that anybody wants to buy the operating business; it’s under-invested,” said Mark Satov, founder of Satov Consultants Inc. in Toronto.

“There are some people in a different age category that probably have a habit of going there and will miss it to some degree, just like people miss going to the restaurant at Zellers and having coffee all day when Zellers became Target, but [beyond that] I don’t think they’re relevant.”

The company is in the midst of a three-year turnaround plan and has sold leases to some of its most prominent locations, many of which will reopen as upscale Nordstrom department stores within the next two years. It has also announced 2,200 job cuts since January, on top of thousands more that it laid off last year.

But in a market that tends to target either high-end shoppers or bargain hunters, Sears has struggled to find a niche with the middle class.

Satov said part of the issue for Sears is that it was bought by a financier, who took cash out of the company instead of re-investing in it.

“Two CEOs left because they wanted to actually do something with it, and Chicago kept saying: ‘No, no, Just send money.’ You can’t do that forever,” he said.

“We are continuing to serve Canadian families coast to coast through our stores and our direct channels,” Power said in an email.

Large-format retailers who may be interested in entering Canada, such as Macy’s and Kohl’s, may be looking at the stores, he said, as well as domestic ones like Hudson’s Bay, which are seeking to block new entrants. Major landlords and pension funds, private equity, or retail turnaround groups could also be interested.

“We believe J.C. Penney is focused on restoring the health of its U.S. business model and will not be interested in entering Canada at this time,” Howlett said in a note to clients.

The remaining Sears stores are in the suburbs or small centres, however, and that may be prove to be a harder sell to international retailers.

“There aren’t too many US retailers who are going to want the leases because they’re not in the ‘A’ malls and they’re very big,” Satov said.

“It’s not that those locations can’t be profitable, it’s just that if you’re a foreign retailer, it’s not the first place you want to go, and it’s not a place you’re going to know. It’s a pretty big risk.”

The company’s most valuable asset may be its website.

“Their website has been one of the things that have been pretty good over the last few years,” Satov said. “Whether or not it carries the Sears brand in the future or whether it’s co-branded, they’ve found a way to have a formula in there that works for people so I would hope that there’s some way to monetize that.”

“Don’t forget in the old days they were a catalogue retailer, so you could argue that they (may) go back to their roots.”