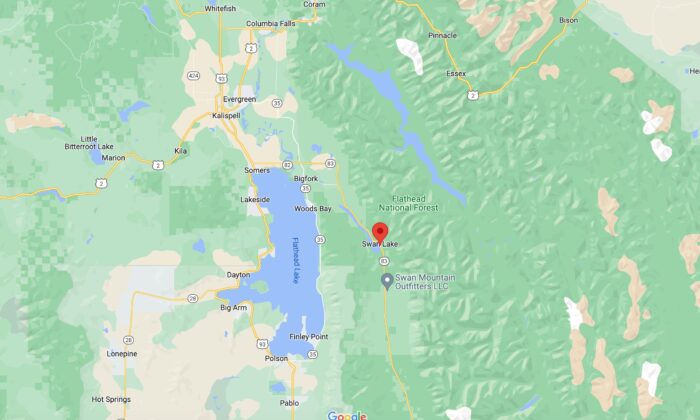 Swan Lake, Mont. (Google Maps/Screenshot via The Epoch Times)
US

SWAN LAKE, Mont.—Search teams have recovered the bodies of two teenagers who went missing after their kayak capsized in a lake in northwestern Montana last week, officials said Monday.

The girl’s body was recovered Sunday afternoon in 86 feet of water in Swan Lake, Lake County Sheriff Don Bell said. The boy’s body was located late Monday morning at about the same depth and about a quarter-mile away, KERR-AM reported.

Search teams from Flathead and Lake counties and Swan-Mission Search and Rescue had been looking for the teens since Thursday afternoon, when Lake County received a 911 call reporting that two people were in the water after a kayak capsized in high winds.

The teens tried to swim to shore but went under before first responders arrived, witnesses reported. Their names have not been released.

Swan Lake is surrounded by national forest land and is a popular place for fishing, boating, and paddleboarding. The water temperature is currently about 39 degrees Fahrenheit, the sheriff said.