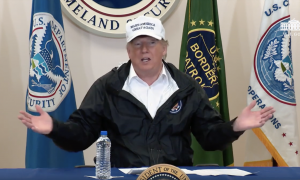 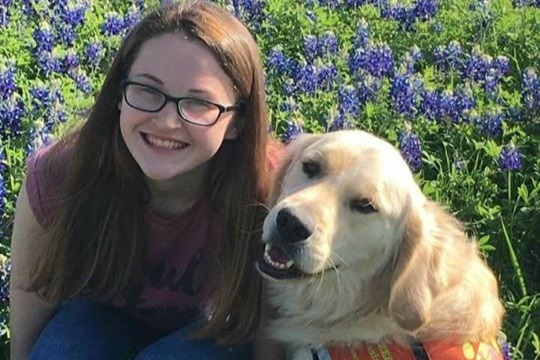 Journey (R) a 4-year-old service dog, was shot outside the home of Hannah Westmoreland, on Jan. 13, 2019. (Justice4Journey/GoFundMe)
US News

Search for Suspect After Service Dog Shot Dead Outside of Home

A service dog was shot outside of a Texas home, prompting an investigation and search for the shooting suspect.

Hannah got the dog, after the town of Quinlan, where Hannah lives, raised $10,000 to get Journey as a puppy for her.

Their partnership was cut short when Journey was shot on Jan. 13. Family members said that Journey was let out of the house for a quick swim in the pond near the rural home, a daily ritual.

But while he was outside, someone shot him. He was rushed to a veterinarian but soon died. The family, shocked, wants to find whoever shot the beloved canine.

Tina Westmoreland described to the Greenville Herald-Banner the moment she found the dog outside.

“Journey was laying right outside here and when I called him he reached one leg up, but he didn’t pick his head up, and I think I just screamed ‘Oh God, something is wrong with Journey,’” she said. “We ran out, he was (lying) there, and we called for help. … He wasn’t moving his legs, he didn’t whimper.”

Missy Adkins Mossman, cousin to Tina Westmoreland, has launched a GoFundMe fundraiser to raise money for a reward to help find the shooter, pay the vet, and, if there’s enough, potentially get Hannah a new dog.

This 4yo golden retriever named Journey was a devoted service dog to an East Texas teenager with diabetes. On Sunday, someone shot and killed Journey while he was in the front yard of his family’s rural home. More on CBS 11 News at 4:30pm and 6pm pic.twitter.com/zPNqvz8eyA

People responding on the page said that the news was painful to hear.

“As a diabetic myself and having been blessed by sharing my life with Golden Retrievers for more than 20 years, I am deeply saddened to hear about this horrific crime,” wrote Lisa Ward.

“My heart hurts terribly for this family. I’m the Mom of a rescued Golden Retriever and fully understand how much Journey meant to the family. My prayers are with you all and I hope for Justice. I’m happy to donate as a way of helping this family,” added Teresa.

“I’m moved by the amount of people who’ve donated and/or left their condolences. It just proves that their is still (much more) good in the world even when evil acts are committed. Love wins!” said another.

Hunt County Crime Stoppers is offering a reward of up to $1,000.00 for information leading to the arrest of the person…

Mossman said in an update on Jan. 15 that Hannah is getting used to life without Journey.

“Hannah stays close to Tina so Tina can keep a close eye on her especially during the night. The outpouring of love, concern for Hannah and her family has been truly overwhelming. There are so many more good people than bad,” she wrote.

A $1,000 reward is now being offered for information leading to animal cruelty charges in connection with the shooting of Journey. Anyone with information is urged to contact the Hunt County Crime Stoppers at 903-457-2929. Tipsters remain anonymous.

Mossman said the family is praying for justice.

“We are praying they can find the person that done this awful deed,” she said. “If anything this person will see this coverage and think twice about shooting an innocent animal. Thank you everyone. We will be putting this money toward a reward to find the killer, get bills and the rest will go toward another service dog when the time is right. We need to mourn our dear Journey. Thank you all again from the bottom of our hearts.”