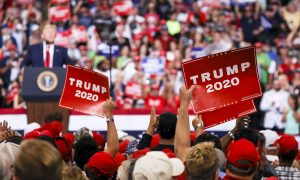 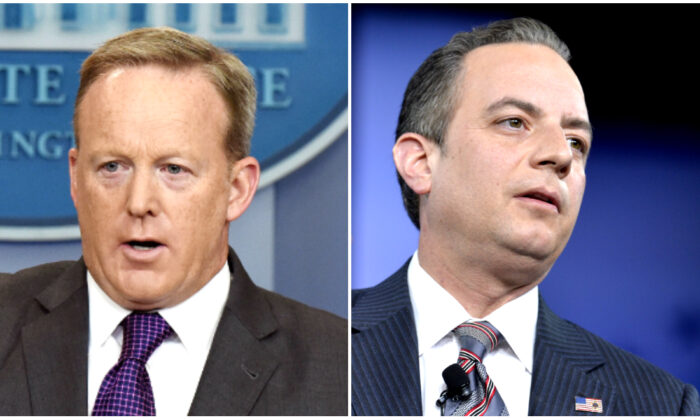 (L) Sean Spicer at the White House in Washington on July 17, 2017. (R) Reince Priebus during a discussion at the Conservative Political Action Conference at National Harbor, Md., on Feb. 23, 2017. (Olivier Douliery/Mike Theiler/AFP via Getty Images)
Politics

Two notable figures from President Donald Trump’s first year in office will be rejoining the Trump administration, over two years after leaving the White House.

The president’s former press secretary, Sean Spicer, and his first White House chief of staff Reince Priebus, will be rejoining the administration as members on Trump’s commission on White House fellowships, the White House announced in a news release.

According to the Obama White House’s website, the commission “interviews National Finalists and then recommends those individuals it finds most qualified to the president for appointment as White House Fellows.”

The White House says the Commission must select applicants for fellowships based on a combination of criteria, including a record of remarkable professional achievement early in one’s career; evidence of leadership skills and the potential for further growth; and a demonstrated commitment to public service.

The news comes after the pair both left their former jobs at the White House in the summer of 2017, when Trump hired Anthony Scaramucci as his communications director—resigning after just 10 days on the job.

Spicer resigned in protest over the hiring of Scaramucci, and found offers for his post-White House life too appealing to forsake, a senior White House official said at the time.

In a major shake-up of his top team, Priebus, meanwhile, was replaced by John Kelly after just six months on the job, and was fired by Trump late July 2017.

Trump announced the move in a tweet a day after Scaramucci accused Priebus of leaking information to reporters in a profanity-laced tirade. Priebus at the time told CNN he had been talking to Trump for some time about exiting the White House.

“The president has a right to hit a reset button. I think it’s time to hit the reset button,” Priebus said in a televised interview from the White House late July 2017. “He intuitively determined that it was time to do something different, and I think he’s right.”

Priebus’s 189-day tenure was the shortest in modern history for a White House chief of staff. In a statement, Priebus said it had been one of the great honors of his life to serve Trump and the country.

“I will continue to serve as a strong supporter of the president’s agenda and policies. I can’t think of a better person than General John Kelly to succeed me and I wish him God’s blessings and great success,” he said.