Sean Hannity’s Warning to America and the World 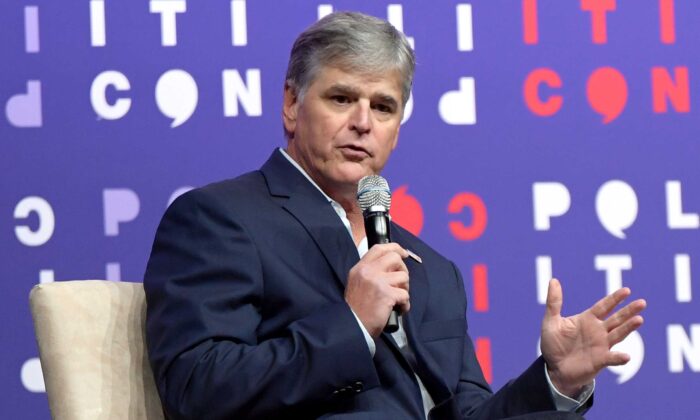 In this interview for the American Thought Leaders series, Epoch Times senior editor Jan Jekielek speaks with TV and radio show host Sean Hannity about why he wrote his first book in 10 years: “Live Free Or Die: America (and the World) on the Brink.”

Jan Jekielek: Sean Hannity, such a pleasure to have you on American Thought Leaders.

Sean Hannity: Jan, thank you. I read The Epoch Times daily. I still like hard papers. I delivered the Long Island Press, Newsday, and the New York Daily News when I was growing up, at different times. And I still like to grab that paper in my hand. I get more printed versions of stories than ever before, but you guys have done an amazing job. And really I think there’s such a void in media, especially newspapers. They slant so solidly one way that there’s very few papers that I can really feel that I can rely on, and The Epoch Times is one.

And anybody that watches this American Thought Leaders show or reads The Epoch Times would know that if it was a conservative, they’d be in big trouble. Try deleting subpoenaed emails. That’s not going to work out or end well for you.

They care about Russia collusion, but they ignored Hillary Clinton’s bought and paid for Russian dossier, that was then used, unverified, to spy on a presidential candidate and his transition team and deep into the presidency. They pushed the Russian conspiracy theory that we now know the FBI knew—even before the first FISA application in August of 2016—was unverified. They knew for sure that it was debunked in January of 2017, when the sub-source of Christopher Steele was saying, “Oh, no, none of this is real. That was all bar talk.”

But they still drag the country through this.

They care about quid pro quos with Ukraine, but they didn’t care about Joe Biden on tape saying, you’re not getting a billion U.S. taxpayer dollars unless you fire this particular prosecutor that’s investigating my son who has zero experience. Yet, they made a big deal about a call with [Ukrainian President] Zelensky and President Trump. After all of that that they put the country through, there was only one fact witness. Every other witness [was a] hearsay or opinion witness.

And what did the fact witness say? “Well, I talked to the president.” “Did he say he wanted anything from Ukraine?” He said, “No, no quid pro quo. … I just don’t want them to be corrupt.” None whatsoever.

And when you just stand back and you take these examples in, it is breathtaking hypocrisy. And then the media that makes such a big deal and they say these things are important: Russia collusion is important, obstruction of justice is important, can’t have Russian interference, can’t have quid pro quos. [But] they just ignore their side.

So they’re really propagandists, statists, no better than the former Soviet Union’s Pravda. They lie. They smear. They slander. They libel. They besmirch. They’re involved in daily character assassination. They have a cultish psychosis and hatred toward all things Donald Trump, and those are the times we’re living in.

And now, we’ve got an election in 82 days, and we have the most radical ticket in the history of this country that is now openly advancing the very policies that are the antithesis of those policies that made this country great. And that’s what I recognized a year ago. I said this is going to be a tipping-point election. We’ll lose the country. If their stated policies are implemented, the United States, literally everything gets turned on its head.

The fourth chapter of the book [is] “Socialism: A History of Failure.” It’s never worked. No matter what name it’s given, no matter what country it’s been tried in, it does not work. It will not work here. The promises that everything is going to be free will never be fulfilled. It will lead to poverty, it will lead to misery, and it will lead to a loss of freedoms. That is the end result every time.

We’re going to either live free and stand by the principles of limited government, greater freedom, that our rights come from God, not from government, and freedom and risk and reward and capitalism, or we’ll go down the hellhole that is socialism, because that’s what’s at stake in just 82 days.

And they’re predicating it on this belief that we’re going to do it, and in 10 years, we’re going to abolish the lifeblood of the world’s economy: oil, gas, and coal. Now, that’s the dumbest decision I’ve ever heard.

The government promises all this. I ask everybody, “How’s government’s track record been so far?” Because I look at New York City, and I look at Chicago, and I look at Seattle and Portland, LA, and San Francisco, how are they doing on the most fundamental role that government should have in terms of law and order, security and safety? If I was a teacher, I’d give them an F. They are failing at a spectacular level.

The next most important thing, how are they doing with the education of our kids? Well, the United States of America spends more per capita than any other country in the industrialized world. And we come in like 37th to 40th, depending on if it’s proficiency in reading or math. There are actually 13 public high schools in the city of Baltimore. Baltimore happens to be the third-highest per capita spending in the world per student. Thirteen. It’s not a quiz. It’s not a test question. I ask all of your viewers what percentage of those kids in those 13 public high schools do you believe are proficient in math? We’ll give you a few Jeopardy seconds. Dah dah dah dah dah. Now, the answer is: There’s not one child. Not one.

What do all these cities have in common? They’ve been run by liberal Democrats for decades.

How did that Obamacare thing work out? Well, millions lost their doctors. That’s not what they promised. Millions lost their plans. And everybody on average across the country is paying about 200 percent more. We’re not saving $2,500 per family per year for better care. And there’s almost 40 percent of the country that has only one Biden Obamacare exchange option.

So those are their promises. I’ll add a couple more things. Last time that I checked, Social Security and Medicare were going bankrupt. Do you remember that? I don’t know when’s the last time you checked, but we’re headed on a trajectory that we’re not going to have enough money to pay for it. By the way, they were supposed to put that money in a lockbox, as they told us. That money has been squandered. It’s been spent. They raided it, they spent it. Where I grew up, we would call that stealing, because they made a promise.

So now, they failed in every major promise they’ve made, but we’re going to believe this new set of promises? And now we’re going to bank on them having a 100 percent track record because what’s going to happen when we’re now dependent on energy again? We’re now energy independent because of Donald Trump’s policies for the first time in 75 years. We’re the world’s largest producer of energy in over 75 years.

How are we going to pull this off? It is $94 trillion for the Green New Deal. It’s $52 trillion for Medicare for All or expansion of Obamacare. We cannot afford it. Let me give you the simple math. We only take in $4 [trillion] to $4.5 trillion a year. Over 10 years, we’re close to $50 trillion. Wow. So that wouldn’t even pay for Medicare for All. And that’s with no defense spending. Zero. None of the other governmental programs are funded and you still come up, well, about two-thirds of the money short, based on the estimates.

It’s a fantasy, it’s a lie, it’s false security. And it will end badly as socialism always ends badly. It starts out with the great promises: “We’ll take the money from those evil, rich people, and we’ll redistribute it.”

That’s not what has made America great. America’s goodness and greatness is the belief that we’re endowed by our Creator. We have talents from that Creator. We dig deep and find those talents. We create goods and services that people want, need, and desire. And guess what? While we’re serving our fellow man, we’re also paying our mortgage and buying a car, as those people that create the cars and build the home are servicing us. There’s never been a system ever designed by man that is better. You show me one, I’ll look at it. I’ve not seen it.

Mr. Jekielek: So Sean, I want to get into “the World” part in your title. When I saw “the World on the Brink,” I was thinking of China, but what were you thinking?

The world would have united the world’s best scientists, researchers, medical professionals. We could have descended upon China to contain this thing—the invisible enemy, the president calls it—immediately, had they just sought help. Everybody would have been all hands on deck, and they allowed this to happen.

In my view, I hold them accountable. And for the senators, [for] this most recent relief package to try to give them liability protection is insanity. They don’t deserve it. And families should be compensated for what they allowed to have happen. They didn’t create the virus, but they allowed the spread of the virus. They didn’t tell the world the truth.

Here’s the broader picture, though. … Let’s just isolate the last century. Over 100 million human souls when you add it all up. Mao, the revolution, China, Russia, Stalin, Hitler, Mussolini, fascism, [Hideki] Tojo, Japan, the killing fields, Cambodia; over 100 million souls killed in these governmental systems.

And we need a strong America. And we need a mighty military to deal with the real evil, the real danger that exists in the world. And to deny that reality or that fact is beyond naive.

It’s amazing because there’s never been a president that has been a closer ally, friend to Israel. More recently, we saw the president’s actions, you’re speaking of China, with Hong Kong. I think that what was inconceivable five years ago is now happening. You see this alliance that has emerged with Jordan and Egypt and Israel and the United States and the Saudis and the Emirates. This is all historic stuff. But the alignment really comes against Iranian hegemony in the region.

China and Iran and Russia [are] the three real, clear, present dangers to the world, I believe, that we’ve got to keep our eye on the most.

Irene Luo
Irene is the assistant producer for American Thought Leaders. She previously interned for the China News team at the Epoch Times. She is a graduate of Columbia University with a degree in Political Science and East Asian Languages and Cultures.