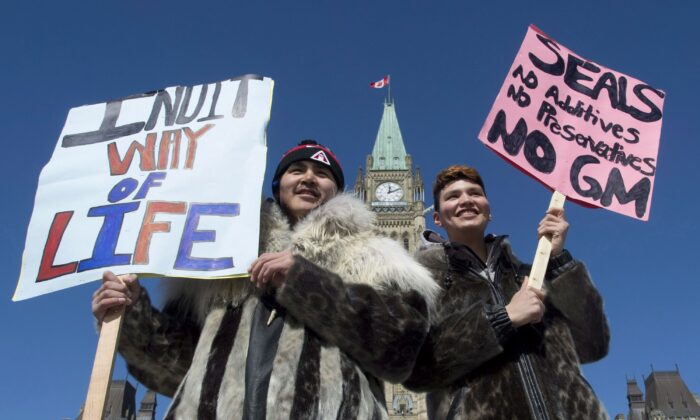 Inuit students wearing sealskin jackets take part in a rally on Parliament Hill on March 18, 2014, to protest the World Trade Organization's decision to uphold a European Union ban on imported seal products. A program run by an Iqualiut-based sealskin fashion designer helps keep poverty at bay for some in the Inuit community. (The Canadian Press/Adrian Wyld)
Canada

OTTAWA—With the approach of sealing season once again in March, anti-sealing activists will be stepping up their opposition to the East Coast seal hunt. The conflict between animal rights groups and seal hunters has been going on for years, as the groups continue pursuing their goal of ending Canada’s annual commercial hunt, believing it to be inhumane.

Although Inuit can hunt seals commercially year-round all over the Canadian Arctic, sealers in the region are still struggling to recover from the European Union’s seal product bans of 1983 and 2009, which had devastating economic consequences.

Architect-turned fashion designer Rannva Erlingsdottir Simonsen has been doing her bit to keep poverty at bay for some in the community through her “Sewing for Survival” program. Her products, created and sold out of her home-based studio Rannva Design in Iqaluit, range from coats and jackets to mitts, gloves, footwear, and accessories, all made with sealskin.

“Sealskin has been my livelihood since 2000,” she said in a recent interview in Ottawa, where she was showing off her products at a trade show called “Northern Lights.”

A native of Faroe Islands—a chain of islands in the North Atlantic that are part of the Kingdom of Denmark—Simonsen said the program helps the Inuit community, particularly women, to acquire some measure of economic independence and regain their long-suppressed pride in their traditional crafts.

Through the program, she outsources work to the Inuit, who use their traditional sewing skills and food byproducts, such as seal bones, pelts, and antlers, to supply her with decorations that complement her designs and to add extra products including key chains and amulets to her collection.

“The Sewing for Survival program provides sustainable and respectful employment for marginalized Inuit women and men,” Simonsen said. “It’s amazing to see the beauty that these women create from within themselves, even when they are in such dire circumstances.”

She explains that many of her female suppliers are victims of domestic violence and live in a shelter across the street from her studio.

‘It Was Our Great Depression’

It was back in the 1960s that animal rights groups first set their sights on the sealskin trade. In 1983, Greenpeace and other groups such as the International Fund for Animal Welfare finally succeeded in getting the European Union to ban the import of sealskin from whitecoat harp seal pups.

Even though the legislation targeted only this one kind of sealskin, all types of sealskin were negatively impacted and the international market crashed almost immediately. The Inuit were exempt from the ban, but because they were part of the commercial market, the ban had a drastic impact across Nunavut.

Within a year, annual seal hunting revenue plunged, poverty grew, suicide rates increased, and nomadic hunters were forced to move into town. Another blow came in 2010, when the EU banned all seal products, further shrinking the market. Where pelts once sold for more than $100 each, they now fetch around $10.

“It was our Great Depression,” said Alethea Arnaquq-Baril in her 2016 documentary “Angry Inuk.” “The ’83 ban was a life-altering event for the Inuit.”

“Angry Inuk” is a counterpoint to animal rights activism and defends Canada’s seal hunt. It argues that, far from being a sport of inhuman cruelty, the seal hunt is the economic lifeblood of the entire Inuit community. The film features Aaju Peter, a Greenland-born Inuit lawyer, seamstress, and sealskin designer who has vehemently denounced the ban.

Peter and Arnaquq-Baril contend that the EU’s exemption for Inuit-harvested sealskin products is vaguely defined and has done little or nothing to offset the economic devastation suffered by their community as a result of the ban.

In 2011, Canada and Norway attempted to overturn the EU ban by filing a challenge at the World Trade Organization, but the ban was upheld. A federal government statement at the time said: “Canada’s position has been that the eastern and northern seal harvests are humane, sustainable, and well-regulated activities that provide an important source of food and income for coastal and Inuit communities.” It added that the ban “was a political decision that has no basis in fact or science.”

Also in an effort to overturn the ban, Inuit groups in Canada and Greenland sued the EU, but a court ruling rejected the challenge.

Although it’s been illegal to harvest whitecoat seals since 1987—and the Inuit have never harvested whitecoats—during hunting season animal rights groups generate a blizzard of protest, often using photos of fluffy baby seals in their literature. Social media accounts become awash in a flurry of messages accompanied by images of cuddly seal pups staring pitifully into the camera.

Thirty-five countries have now banned seal product imports, the most recent being India in April 2018. Canada’s biggest market for seal pelts is Norway.

Simonsen and other sealskin designers in Nunavut and Newfoundland have managed to keep their businesses afloat. She sells her products in Canada and several other countries. Her creations have even been seen in the corridors of power, including on Parliament Hill and at diplomatic receptions.

In the process, she’s giving a glimmer of hope to some of Nunavut’s Indigenous craftspeople. “Sewing is close to the heart of Inuit women,” she said.