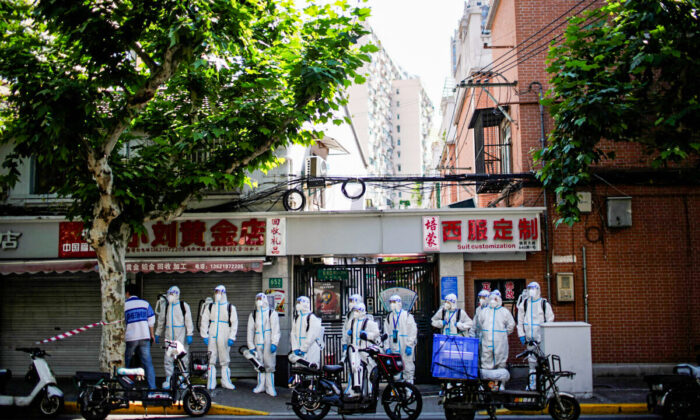 Workers in protective suits stand on a street as they disinfect during lockdown in Shanghai on May 18, 2022. (Aly Song/Reuters)
CCP Virus

Shanghai officials on May 17 said they achieved zero infections outside quarantine zones for three consecutive days, marking a long-awaited milestone for a city that has been in lockdown for over seven weeks, though most residents are still confined to their homes.

As of May 18, an estimated 790,000 people were still in sealed-off areas, local officials said, where people are subjected to the strictest form of lockdown. The officials didn’t say how many people were in isolation centers.

Shanghai registered 815 cases over a 24-hour period from May 17 to May 18, Zhao said a press conference. The official count, however, has been disputed by residents and experts, who point to the Chinese regime’s history of downplaying and covering up information about outbreaks across the country.

The commercial hub of 25 million released a timetable for gradually exiting the lockdown, which has lasted for over seven weeks, saying they plan to reopen from the start of June. Unsurprisingly, the plan was met with skepticism by residents who had seen their hopes being dashed time and again. The initial lockdown was expected to last only eight days when it was introduced in late March.

The authorities have lost credibility, said a resident surnamed Wang who is still stuck inside his home. Wang’s residential community has been placed in a “quiet period” since May 15 and given no official explanation. During the ten-day period, no one is allowed to leave home, and deliveries have been halted.

Some say they have been given passes to exit their residential complexes. The pass only allows one person per household to leave for a few hours at a time, a local resident told The Epoch Times on May 17.

The pass is valid for three hours, said another resident in the Fengxian district. People need to line up for one to two hours to get into a supermarket, the man surnamed Chen told The Epoch Times, adding that they’ll lose the pass if they don’t return on time.

Even if people have a pass, they can only venture to within a few streets from their home, according to Chen. He is still unable to visit his daughter living in the Pudong district, about a 45-minute drive from his home.

“Fully reopening or resuming work is still very far away,” said a third resident, who has been sealed in a residential community in Minxing district for 60 days.

One social media user described the post as “nonsense.”

“We have been locked in at home for two months. … This story is meant for anyone else other than people in Shanghai,” the user wrote.

By the morning of May 17, the post had been deleted.

Many migrant workers in the city are desperate to return to their home cities and towns after enduring the protracted lockdown.

Social media posts have shown long queues of people, mostly migrant workers, outside one of the city’s main railway stations, looking to return home after getting permission to go outside.

Some have been photographed hauling suitcases on rented bikes or trekking on foot from distant corners of the city.

A deliveryman surnamed Liu said it’s “incredibly difficult” to get a train ticket to return to his hometown.

Liu said he heard a worker paid an extra 500 yuan ($74) to get a ticket from a scalper. “It’s a blessing to be able to get a ticket,” Liu told The Epoch Times on May 17. He said that workers who get to go home still have to undergo quarantine upon their return.

Sun Wei (an alias), who works in social media and had been deprived of an income for over two months due to the lockdown, finally got permission from a neighborhood community and left the city on May 17.

“If I had continued to stay in Shanghai, I would have starved to death,” Sun told The Epoch Times from a quarantine hotel in his hometown, Fuyang city of Anhui Province, about a seven-hour drive from Shanghai.

The week-long centralized quarantine cost him about 900 yuan ($133) before he was allowed to be isolated at home for another seven days.

The draconian curbs have inflicted pain on millions of residents in the city and wreaked havoc on the country’s economy.

China’s April economic data were bleak: retail sales and factory production dropped to their worst level since the onset of the pandemic, and the country’s unemployment rate hit a two-year high. The data released by the National Bureau of Statistics on May 16 were worse than economists had expected.

The American Chamber of Commerce in China said on May 17 that the regime’s zero-COVID policy would hamper foreign investment for years to come as travel curbs disrupt projects. Big firms are also exploring alternatives for their supply chains, it said.

“Unfortunately, the COVID lockdown this year and the restrictions for the last two years are going to mean three, four, five years from now, we will see investment decline, most likely,” chamber President Michael Hart said.

Luo Ya, Gu Xiaohua, Zhao Fenghua, Fangxiao, and Reuters contributed to this report.