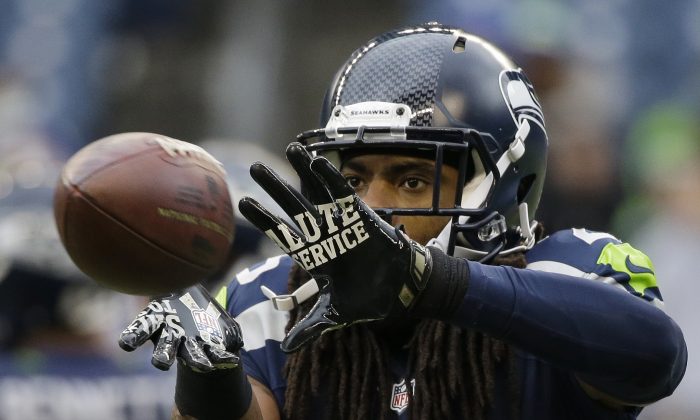 FILE - In this Nov. 9, 2014, file photo, Seattle Seahawks cornerback Richard Sherman warms ups before an NFL football game against the New York Giants in Seattle. For the first time since flexible scheduling came to “Sunday Night Football” in 2006, the NFL could go an entire season without needing it. Seahawks-Cardinals in Week 16 keeps getting juicer with Arizona’s improbable run to the league’s best record and the defending Super Bowl champs’ wobbly playoff hopes. (AP Photo/Elaine Thompson, File)
News

SANTA CLARA, Calif. (AP) — At midfield, Richard Sherman cradled a game ball in his right hand and took a chomp out of a turkey leg with his left.

Seattle’s do-everything, unguarded cornerback certainly earned his postgame feast after a two-interception night that kept the defending Super Bowl champion Seahawks right in the NFC West race with a 19-3 win against the San Francisco 49ers on Thursday.

Just like 10 months earlier with that game-sealing deflection in the end zone during the NFC championship game, Sherman was in the middle of all the big plays. With Michael Crabtree the target again, too.

Sherman set up the only touchdown of the game with another key defensive play in this heated rivalry, then made a second interception with the 49ers driving late, and the Seahawks ended a five-game losing streak on San Francisco’s home field.

“The second one was pretty entertaining. I was laughing the whole time,” Sherman said. “They threw it. I said, ‘Way to be, way to be.'”

Sherman and Crabtree were at the center of the decisive play in January’s NFC title game, when Sherman tipped the ball to Malcolm Smith for an interception with less than a minute remaining in the Seahawks’ 23-17 victory. Sherman later called Crabtree “mediocre.”

Asked about Crabtree on Thursday, Sherman quipped: “History? What history?”

The Seahawks kept Crabtree and quarterback Colin Kaepernick off balance all night.

“He said he was throwing to the open man. He didn’t care who was out there,” Sherman said of Kaepernick. “I was the open man.”

Russell Wilson threw a 13-yard touchdown pass to Robert Turbin in the first quarter, and the Seahawks (8-4) won by the same score as their victory over first-place Arizona five days earlier.

“Big wins, division opponents, and these games count as two to me,” safety Earl Thomas said. “We’re playing together, man. That’s what’s so powerful. … It felt good, it felt like we were alive.”

Here are five things of note from the Seahawks’ first visit to new $1.3 billion Levi’s Stadium:

BIG-GAME SHERMAN: It was 49ers coach Jim Harbaugh who turned Sherman into a defensive back during his days at Stanford. Now, he’s one of the best.

Sherman had the fourth two-interception game of his career with his 22nd and 23rd picks since 2011, most in the NFL.

Might these games mean just a little more to Sherman?

“It could,” Seahawks outside linebacker Bruce Irvin said. “That was his college coach, the Crabtree incident last year. I’m pretty sure beating the Niners means a lot more to him than the rest of us.”

ANGRY OWNER: In the waning moments with thousands of red seats already empty, 49ers CEO Jed York posted on Twitter: “Thank you (hashtag)49ersfaithful for coming out strong tonight. This performance wasn’t acceptable. I apologize for that.”

“It’s not acceptable,” he said. “We didn’t perform well. We have a much higher standard for ourselves. … We have to win out in order to have a shot to get into the playoffs.”

Even general manager Trent Baalke’s daughter, Cassie, apparently got into the Twitter discussion about the team’s struggles, calling out offensive coordinator Greg Roman. The tweet was quickly removed.

“Greg Roman can take a hike..the 49ers don’t want you no more,” the tweet said.

The 49ers were held to three points or fewer for the first time since a 29-3 Week 2 loss at Seattle last year. And they still must face the Seahawks in 17 days at CenturyLink Field.

“We’ve got to reboot, come back and win them all,” Harbaugh said.

WHAT HOME FIELD? Much of the crowd went home early, so it hardly felt like much of an advantage for the 49ers with any kind of additional noise level.

Nothing like what Seattle is used to with its deafening “12th Man.” Sherman not only criticized the home crowd for leaving early, but also for yelling “vulgar” insults throughout. He said someone tossed a bottle as the Seahawks left the field after the game.

“It didn’t matter if we were on the road or not,” Thomas said. “We silenced the crowd.”

PENALTY FEST: This one could have been far more lopsided.

“Other than this game being a penalty game we pretty much did what we’re able to do, so it was really good,” coach Pete Carroll said. “All I can tell you is we’re working at it. We’re playing really hard and really aggressive, so it’s kind of like last year. We’re pretty good at leading and last year, too, in penalties.”