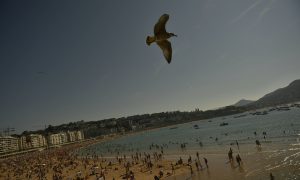 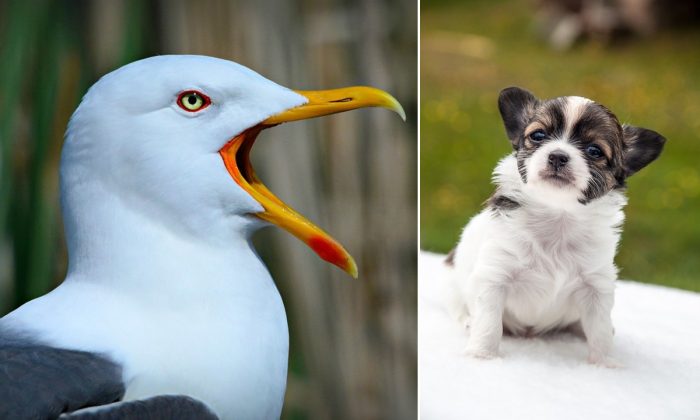 Seagull Swoops Down and Steals Chihuahua Puppy From a Garden, Search On

A seagull swooped in just like an eagle and stole away a 2 kg chihuahua puppy from a family’s garden in Paignton, a seaside town in Devon, England on July 28.

The shocked owner of the puppy has issued an urgent public appeal for help with finding her dog, reported the Devon Live.

Gizmo, the four-year-old dog, was in the garden when a seagull picked it up in its beak—and flew off with it.

“My partner was in the garden putting the washing out at the time, and suddenly he saw it swoop down. It carried Gizmo a fair way as we couldn’t see him anymore. I have no idea if he was dropped or where he is now,” Gizmo’s owner, Becca Louise Hill, 24, told Devon Live.

Hill told BBC that the seagull grabbed Gizmo “by the scruff of his neck.” Her partner tried to save the dog by grabbing his legs but wasn’t able to.

Becca Hill has made an appeal to find four-year-old Gizmo after the gull swooped down and grabbed the dog from her back garden in Devon, UK 😢

Becca still has three chihuahuas, and she is hoping that social media will help to alert people who will help her find Gizmo. She said she’ll keep looking for him till she finds him.

“It is not nice at all that one of my babies has gone,” she said.

Ornithologist Peter Rock from the University of Bristol told BBC Radio 4’s program, Today that seagulls are capable of carrying away small animals.

“If you have a very tiny little dog I suggest you don’t let it run around in your back garden… it may well become a meal,” said Rock.

A Member of the Parliament for Barrow and Furness, John Woodcock, has demanded that the government feed contraceptives to seagulls after many other attack episodes were reported.

“The seagull issue has been a menace for years. Putting contraceptives in food has been effective in some areas. An alternative is replacing their eggs with fakes,”

According to Devon Live, anyone with any information about Gizmo can call on 07774724797.

The Mirror reports that the population of seagulls increased four times over from 2000 to 2015, and incidents of them attacking people and pets are increasingly being reported.

An elderly couple was held hostage by seagulls for a week in June. The man ended up in the hospital because of a seagull attack.

Roy and Brenda Pickard were held hostage by seagulls inside their home for almost a week in Lancashire, in northwest England. The aggressive birds threatened them every time they opened their door.

The elderly couple was not able to leave their house for six days as two seagull chicks were in a nest on the canopy over the front door, reported the Daily Mail. Roy even ended up in hospital after trying to make an escape.

Good to see @thetimes picking up the growing calls for action against the urban seagull menace 🐦 🚫 pic.twitter.com/Zh8Z6b3YPS

Since the chicks were just nine feet above the ground, every time the elderly couple tried to get out of their front door, the over-protective gull parents would fiercely attack them.

Eventually, Roy was attacked on the neck by the gull and had to go to the hospital for treatment, reported the Telegraph.

Roy then contacted the Royal Society for the Prevention of Cruelty to Animals (RSPCA), RSPB, and his local BBC radio station, and it was BBC Radio Lancashire that came to their rescue and set up a temporary gazebo, so he can sneak away out of sight of the birds, according to the Daily Mail.