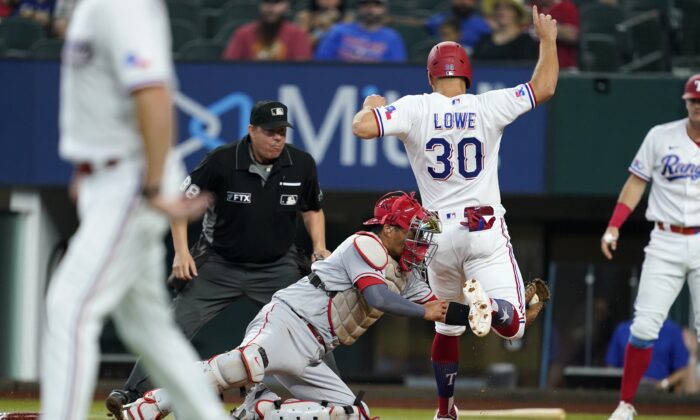 Seager drove a 1–1 fastball from José Quijada (0–5) deep to left-center for his 32nd homer, extending his career best in his first season with Texas.

Quijada came in to pitch the eighth and walked leadoff hitter Marcus Semien before Seager connected for his opposite-field shot.

Matt Moore (5–2) got three outs for the win, and Jose Leclerc handled the ninth for his seventh save in eight opportunities.

Angels star Shohei Ohtani was held out of the starting lineup, but he pinch-hit with one out in the ninth and doubled into the right-field corner. Luis Rengifo and Mike Trout then struck out swinging.

The Rangers won a series for the first time since Aug. 19–22. They also took the season series from Los Angeles and moved a half-game ahead of the Angels in the fight for third place in the AL West.

“To come out and win a series against an in-division team, it’s something to be proud of,” Seager said.

The 28-year-old Seager finalized a $325 million, 10-year contract with Texas in December. But the Rangers (65–84) are playing out a sixth consecutive losing season.

Seager reached the postseason in his first seven seasons with the Los Angeles Dodgers.

“Failure always drives you,” Seager said. “You don’t ever want to lose. You remember how it feels, and it makes you go work in the offseason.”

“We walked three leadoff hitters today, and all three of them scored,” Nevin said. “We’ve got to get better at that.”

Angels right-hander Michael Lorenzen was charged with three runs and two hits in five-plus innings. He struck out seven and walked two.

The Angels led 3–1 before the Rangers rallied in the sixth. Leody Taveras walked and Semien singled before Lorenzen was replaced by Aaron Loup.

After Seager bounced into a forceout, Nathaniel Lowe and Adolis Garcia hit consecutive RBI singles. Jonah Heim followed with another base hit, but left fielder Jo Adell cut down Lowe at the plate.

Los Angeles scored three times in the third against Martín Pérez. Trout, serving as the designated hitter with Ohtani out of the lineup, hit a two-run double with two out and scored on Taylor Ward’s single to right.

Pérez allowed five hits, struck out five and walked three in six innings. The left-hander won each of his previous two starts.

Ohtani was held out of the starting lineup for the ninth time in 151 games this season. It was the first time since Sept. 4.

“We like to think he’s Superman and can do it every day and all that, but he’s human,” Nevin said. “We’ve got to give him days of rest once in a while. I like to do that either the day before or after he pitches.”

Nevin said other factors were the lefty-lefty matchup against Perez and getting Trout off the artificial turf for a day.

Before the game, some Angels players sat quietly in the clubhouse watching a documentary about Hall of Fame pitcher Nolan Ryan, who spent nine seasons with the Angels and five with the Rangers.

In it, Ryan said he assumed the December 1971 trade from the New York Mets to “sunny California” sent him to the Dodgers. When he learned he was traded to the Angels, he said, “I could have died.”

And the room burst out in laughter.