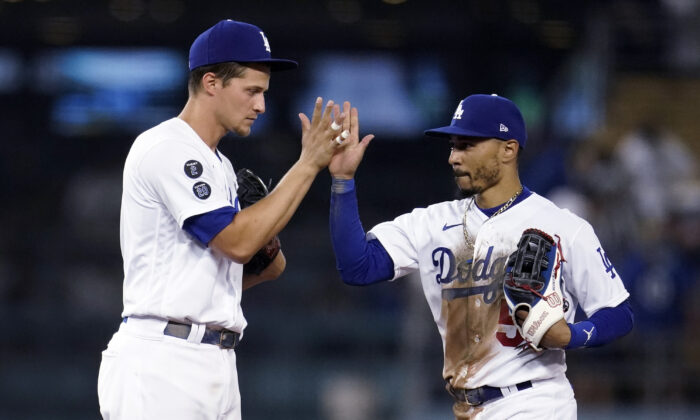 LOS ANGELES—Corey Seager hit a tiebreaking double in the eighth inning, lifting the Los Angeles Dodgers to a 3-2 victory over the Atlanta Braves in a matchup of playoff contenders on Aug. 31.

Atlanta lost All-Star second baseman Ozzie Albies after he fouled a ball off his left knee in the fifth and had to be carried off the field. He’s batting .260 and leads the National League in extra-base hits with 63.

The team said X-rays were negative. Albies will be re-evaluated in a couple days after the ball struck him on the kneecap.

“That could have been something really bad right there,” Braves manager Brian Snitker said.

Mookie Betts drew a leadoff walk from Tyler Matzek (0-4) and scored from first on Seager’s hit to deep right-center, giving the Dodgers their first lead of the game. Matzek’s streak of scoreless innings ended at 18 1/3.

Betts tore around the bases and dived into home plate on his belly, a welcome sight just five days after coming off the injured list. He missed 16 games with a sore right hip that had bothered him since spring training.

“We’re a lot better team when he’s out in the field and healthy,” Seager said. “He made a big catch, he ran the bases really well, he hit a homer. He’s out there having fun.”

Betts’ 19th homer of the season in the fourth left the Dodgers trailing 2-1.

Los Angeles moved within a half-game of NL West-leading San Francisco after the Giants lost 6-2 to the Milwaukee Brewers. The Dodgers finished August with a 21-6 record, their fourth-best month in Los Angeles history.

“I really believe our best baseball is still ahead of us,” Dodgers manager Dave Roberts said. “The pitching has carried us in the last three weeks, but I’ve seen some good things in the offense collectively. We’re going to put some big numbers up going forward.”

The NL East-leading Braves dropped their sixth straight at Dodger Stadium, where they’ve lost nine of 10.

Morton gave up one run in six innings, struck out eight and walked two in his first outing at Dodger Stadium since he was the winning pitcher in Game 7 of the 2017 World Series, in which Houston defeated the Dodgers.

Blake Treinen (5-5) struck out the side in the eighth. Freddie Freeman slammed his bat in the grass after he went down swinging. He grounded out in his first three at-bats.

Kenley Jansen retired the side in the ninth for his 30th save.

Chris Taylor’s pinch-hit sacrifice fly tied it at 2 in the Dodgers seventh.

Travis d’Arnaud’s RBI double extended Atlanta’s lead to 2-0 in the fourth. He was robbed of a potential home run by Betts in the second. Betts raced to the lower wall in right and got his glove over it just in time to make the catch.

Sporting bleached-blond hair, former Dodger Joc Pederson sent a solo shot into the right-field pavilion in the third off Walker Buehler for a 1-0 lead.

“Throwing a changeup up in the zone is not a good pitch,” joked Pederson, who planned to text his good friend Buehler after the game.

“People aren’t supposed to hit that pitch that way,” Buehler said. “We got the win and that’s all I really care about.”