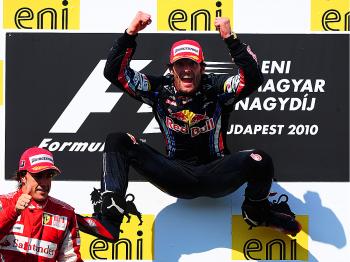 Red Bull's Mark Webber leaps into the air to celebrate winning the Formula 1 Hungarian Grand Prix, his fourth of the season. No other driver has more than two wins. (Clive Mason/Getty Images)
Motorsports

“An incredible day for the team—another victory,” Webber said on SPEED-TV. “One-two was our goal. Unfortunately we didn’t get that, but we still got a big chunk of the points, so it was a good day.

Webber said he was somewhat surprised to win. “[Vettel] was on pole and he was leading the first stint, and unless he makes a mistake or has a problem it is probably going to be his race. Second was certainly in the cards for me. But this is racing and sometimes it happens.”

Vettel started from pole and made a great start for a change, opening a second-a-lap gap on the field. Ferrari’s Fernando Alonso got by Mark Webber, and almost overtook Vettel.

“The start was super," Alonso told SPEED. “We passed Mark, thanks maybe to the clean side, and then we were side-by-side with Vettel in the first corner. Not able to overtake this time, but very close.”

A yellow flag for debris on lap 14 brought almost everyone into the pits. Only Mark Webber, Rubens Barrichello, and Jarno Trulli stayed out. Webber, who took over the lead, was on the soft Option tires, supposedly good for five laps, and ruined by fifteen.

Nobody even noticed Webber, as the action in the pits attracted all eyes. First, Mercedes driver Nico Rosberg lost a right rear tire leaving his pit stall. The wheel flew down pit lane, bouncing 20 feet in the air twice, before hitting a Williams mechanic, who was bruised but not seriously injured.

Renault and Mercedes were each fined $50,000 by the FIA their errors during the pit stop.

When the remaining cars made it to the track, Webber was in the lead with Vettel right behind. Vettel slowed dramatically in order to get a run on the restart, earning himself a drive-through penalty and throwing away a race win; he would have inherited the lead when Webber finally pitted.

“I didn’t understand what was going on and why I was penalized,” Vettel claimed later. “It was a question mark for me.

“Obviously very disappointed, as otherwise it would have been a walk in the park today and we could have won the race, but it didn’t happen, so we saved the podium.”

“I knew that Seb had some difficulties on the re-start for whatever reason,” Webber explained. “It was a bit of a gift today for me, but I have not had many of them, so I will take today’s. Tough luck for Seb, as he lost a couple of spots.”

Webber went on to lay down a long string of fastest laps, on option tires running two or three times their expected lifespan.

“We knew the option tire was pretty sturdy, but I still had to find the limit of driving flat out but without going off the edge,” Webber explained to Formula1.com.

“I needed to pull over 20 seconds to [Alonso], and the front left tire was not enjoying the last 10 laps for sure, particularly in the last corner. I was pretty happy with the way I drove there.”

Lewis Hamilton parked his McLaren on the course on lap 24, his transmission gone.

“I was accelerating out of Turn One when I felt a sudden vibration and then a loss of drive,” Hamilton told Formula1.com. “I initially thought it was a driveshaft failure, but it now appears that it was a gearbox problem.”

With Jenson Button qualifying and racing poorly, McLaren gave up the lead in the points and constructor’s championships, but Button remained optimistic.

“I lost a lot of points, and for the team to take home only four points today is disappointing, but there isn’t a very big points gap covering the top four drivers,” he said. “I’m only 14 points behind the championship leader, after all, so it’s still all to play for.”

Webber opened a gap of almost 24 seconds before he pitted on lap 43; he switched tires and rejoined the race still in the lead. By lap 70 when the checkered flag waved, Webber had re-opened the gap out to 17.8 seconds. Webber showed everyone the proper way to drive an F1 car on this day.

Sebastian Vettel couldn’t pass Fernando Alonso, finishing third in a race he should have won.

Red Bull Team Principal Chris Horner said before the race, that Red Bull couldn’t keep throwing away chances; they had to start converting poles into wins. Vettel, the nominal Number 1 driver, dropped the ball; Mark Webber, Number 2, picked it up and carried it home for the team.

The battle between Vettel and Alonso showed some interesting differences in the two chassis. The Red Bull seemed to be quicker in the first and third sectors, but the Ferrari got out of corners faster—possibly the Ferrari engine has more low-end torque.

It is well known that the Red Bull is slower than the Ferrari, McLaren, or other F-ducted cars (though Ferrari was not using theirs today and was still faster.) Possibly Red Bull’ s superior flex-wing (see below) gets them into corners with more speed but Ferrari’s motor negates the advantage on the exit.

But Webber, with the same chassis, left the field far behind.

Perhaps Vettel was unable to focus because he was unable to control his emotions. Right up into the post-race press conference, Vettel was calling his penalty unfair (which is ridiculous—it was blatant in the extreme.)

“I did not understand inside the car what was happening, and I still do not really understand why I did get a penalty,” Vettel said. “In the end I should have won.

“Maybe you can argue that we did something wrong against the regulations but then I don’t know.

“I was obviously pretty angry and had to finish the race (driving) thirty laps behind Fernando. We were clearly faster but there was no way to get past.”

In any case, Alonso drove faster for most of the final laps, despite Vettel earning fastest lap in the final lap of the race (where was that effort in the preceding thirty laps, when Alonso was generally three-tenths quicker?)

Whatever the issue, it wasn’t the car—Webber, in basically an identical car, set about a dozen fastest laps during the race, and opened huge leads at will, and Vetel set fastest lap of the race. Maybe it just wasn’t Vettel’s day. Whatever—Red Bull racing has a new Number One driver today.

Good Day for the Little Guys

The top ten featured some unusual faces this week. Nico Hulkenberg and Rubens Barrichello both scored for Williams, with Hulkenberg driving an excellent race to finish sixth. Renault lost out when Robert Kubica crashed out, but Vasily Petrov, reportedly driving to save his job, finished fifth behind Felipe Massa, and passed Lewis Hamilton at the start—even though Hamilton intimidated his way past within a few laps, it was a first-rate performance from Petrov.

Pedro de la Rosa scored a seventh for Sauber, holding off Jenson Button for most of the race. And Kamui Kobayashi turned in one of the best drives of the race, starting last because of a penalty in qualifying, and finishing ninth. This is the first time both Saubers have finished in the points.

"I think I had a good recovery from my bad qualifying,” Kamui Kobayashi told Formula1.com. “I am so pleased for the team that we brought both cars into the points for the first time this season. I think we can now all be happy going into our summer holidays, which is a very nice feeling."

Much has been made of the flexible front wings used by Red Bull and Ferrari. Some people think this front wing is the secret to Ferrari’s newly-discovered speed and also the reason behind Red Bull’s domination.

FIA rules require that the endplate of the front wing be three inches from the ground, and they have a testing rig that loads each wing to measure its distortion under load.

Apparently red Bull has discovered that by orienting the reinforcing strands in the carbon fiber weave in certain ways, the wing can be made stiff enough to stay within parameters in the FIA tests, while still bending significantly at racing speeds.

This gives the wing greater efficiency by sealing off the turbulence from the front tires and giving the wing clear airflow, increasing its effectiveness. Some think this is why Red Bull RB6 is so good into medium and fast corners—its wing keeps the front end stuck to the ground better than the oppositions’.

Ferrari came out with its version of the flex-wing at Hockenheim, and finished 1–2, after being several places back most of the season. And Red Bull seems to always be ahead of the pack. When everyone copied its blown diffuser, Red Bull still had the Flex-Wing up its sleeve to maintain an advantage.

The FIA is very strict about moveable aerodynamic devices. It is not clear if the new flex-wings meet both the spirit and the letter of the law. It is undeniable that Ferrari had dramatically improved its performance in the past two races when it started using its bendable wing, and Red Bull has always had a performance edge n the field.

Several teams, including McLaren, have asked FIA Race Director Charlie Whiting to make a definitive ruling on flex-wings before those teams spend millions of dollars developing their own versions.

Pushing the envelope has always been part of F1. The technological ingenuity the series fosters is a major attraction for some fans. And creative readings of the rules allow for devices like double diffusers, blown diffusers, f-ducted wings, and now, the flex-wings.

Double diffusers are gone next season, and no one knows yet about the future of flex-wings. But it is good to see that there is still room in F1 for creative geniuses to invent new ways to go faster.

Formula 1 takes its three-week summer break before returning to action with the Formula 1 Belgian Grand Prix at the historic Spa-Francorchamps course, on Sunday, August 29, 2010. Tickets and travel arrangements can be made through Tickets &Travel at Formula1.com.

The race will begin at 8 a.m. EDT and will be broadcast on SPEED-TV in the United States.