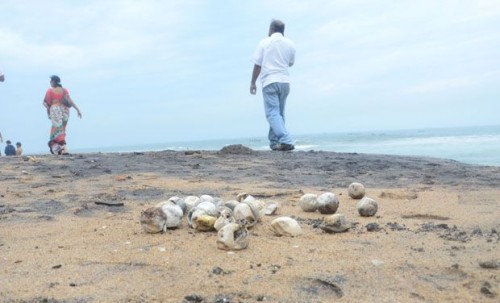 In yet another unfortunate witness to the negative impact of human development on the ecosphere, and ultimately the biosphere, coastal erosion recently caused hundreds of Olive Ridley turtle eggs to be washed out of their nests in Visakhapatnam in Andhra Pradesh.

Nesting Olive Ridley turtles are known to bury their eggs in nests that are up to three feet deep on sandy beaches. However, constant coastal erosion has managed to even wash out these deeply buried eggs, thus reinforcing the fact that the long-pending environmental issues of coastal erosion in Visakhapatnam were in fact also a major ecological threat.

Most of the eggs that lay strewn on the Rama Krishna beach in the city were either rotten or badly damaged. This unfortunate incident has thus exposed the inadequacy of the conservation efforts undertaken so far by the government as well as by various non-governmental agencies.

The exposure of the eggs has also proven that neighboring beaches like Bheemili beach, and even the Rama Krishna beach in the city, are major nesting grounds for the Olive Ridley turtles.

Voicing strong opinions about the vulnerability of these eggs to various human-induced factors like pollution and climate change, many environmentalists in the city pointed out at the lack of commitment on the part of the forest department in ensuring safe hatchings of these eggs.

“The forest department is getting funds for protection of these turtles, but so far no concrete measures are visible,” said city-based environmentalist, J.V. Ratnam.

Various environment experts and academics have further demanded that parts of these beaches be declared as protected areas for the conservation of the Olive Ridley turtle species.

Prof. Bharatha Lakshmi from the department of zoology at Andhra University commented,

“In situ, or on site, hatching of these turtle eggs would go a long way in the conservation of these vulnerable species. Therefore, it would be great if the government could ensure that certain areas on these beaches are declared protected areas since the state is an important nesting site for these turtles.”

In reply, Visakhapatnam divisional forest officer P. Ram Mohan Rao said that the department is planning to start in situ conservation of these turtle holds as a long term measure.

We can only wait and see if the department comes good on its word. Until then the Olive Ridley turtles, and many other such vulnerable creatures, are on their own in the fight for survival.

This article was originally written and published by Rohit Daniels, a contributing writer for indiasendangered.com. For the original article and more information, please click here.