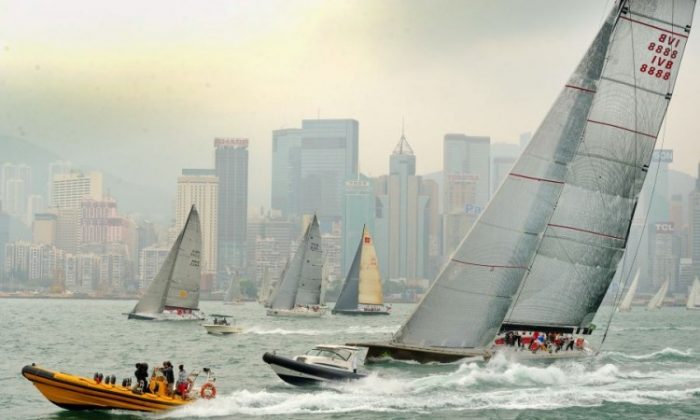 Recognised as Asia’s premier Category 1 Offshore race, many who were there said that it was the most exciting start to the event that they had seen. Impressive given that this year the China Sea Race celebrates its 50th Anniversary.

With wind gusting at around 17 knots at the start, one maxi and a mixture of 50 to 35 footers departed for the approximately 570 nautical mile journey to Subic Bay, Philippines, that takes up to four days.

There was quite a bit of excitement early on.
Maxi Genuine Risk tacked toward the north shore, but made a spectacular turn. On the return tack she was very close to some of the following craft, requiring some good sailing to negotiate a narrow path through them.

Going on to take an early lead, Genuine Risk is the yacht expected to cross the finish line first to win line honors.

Skipper and owner of the 2004-built Genuine Risk Geoff Hill has had first-hand experience of the race since 2004 and is confident his 90 footer will win line honors—especially since another maxi, Nicorette, withdrew.

Although acknowledging the other competitors, Hill regards the sea and weather as his main adversary. Easily outclassing the other boats, such optimism is understandable as maxis are built to race for line honours.

“I regard the Rolex China Sea Race as one of the true offshore blue water classics, and I have done most in the same category such as the Newport to Bermuda race because, unlike the Sydney to Hobart, you are genuinely offshore for most of the race,” said Hill in a media release.

“I also enjoy the fact that it’s a very tactical race and, therefore, you really need to get your navigation correct … particularly in the Philippines sector.

“My major competition will be firstly, as they always are, the sea and the weather as they will determine who wins the race. Having said this, the Rolex China Sea Race can often be a small boat race and on handicap there are plenty of contenders, ranging of course from Neil Pryde who has had a lock on first place with Hi Fi to Anthony Root on Red Kite II, who has also been very successful.

“On handicap, you can never leave out Nick Burns and Fred Kinmonth’s EFG Bank Mandrake. As for first across the line …”

While Genuine Risk quickly opened up a wide gap, also with a good start was defending champion Neil Pryde and his team on the aforementioned Hi Fi; they are expected to win on handicap or corrected time.
Pryde, though confident, knows that the challenges they face mean that winning is not a foregone conclusion.

“There’s something about the Rolex China Sea Race that continues to fascinate me,” he said in a press release leading up to the race. “The challenging conditions that develop as the race crosses the South China Sea make this race one of the tactically most interesting ocean races in the world and a real test for navigators and their weather skills.”

For some the main focus may be to race for the line or to simply finish. For others it may be more of a romantic idealism of ocean racing that drives these sailors – as skippers and owners Peter Churchouse, of Moonblue 2, and Dean Chisolm, of Darling, explain in the press release.

“I love getting out of Hong Kong’s ‘fog belt’ – love that spinnaker in the moonlight that comes up in the early evening on the port bow,” said Churchhouse. “The aft deck is specifically designed for fishing, which we do a lot on offshore races and cruises.”

“Offshore racing is unique,” said Chisolm. “There is a lot of preparation for Cat 1 racing, but it’s all worthwhile out at sea – Dolphins alongside at dusk are captivating and steering at night, under the stars, on long ocean waves, with the spinnaker up is magic.”

As the sun set yesterday, Genuine Risk was some 13 nautical miles ahead of the chasing group of three led by Hi Fi then Freefire and Jelik 5.