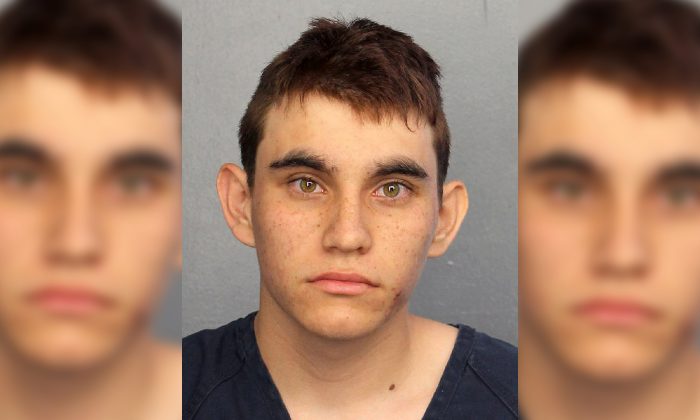 Warning signs in the life of Nikolas Jacob Cruz make up a troubling mosaic of a young man coming ever closer to murder, as the 19-year-old confessed to shooting 33 former classmates, coaches and teachers at a Florida high school on Valentine’s Day.

According to a report by the Sun Sentinel, citing a “close family friend and former neighbor,” Cruz’s adoptive parents insisted the boy’s biological mother get a medical exam and pass drug tests. The identity of his biological father was unknown.

By all accounts, Lynda and Roger Cruz provided a stable and loving home environment.

“They had a beautiful house,” said Ben Aaronson, reportedly a close friend of Lynda and Roger Cruz.

“They had a very close relationship with their father,” Aaronson said of the boys, the Sun Sentinel reported. Roger Cruz was often away on business. But “when he was home,” Aaronson said, “he was all about his kids. I remember Roger having this entire, like, really extended type jungle gym out back, in the backyard, being built,” he said. “They built another wing to the house, and the kids just had plenty to do.”

Lynda Cruz was said to be a stay-at-home mom, engaged in the life of the two children she and Roger raised together, Nikolas and Zachary. The latter was born less than a year after Nikolas’ adoption and to the same biological mother, though was fathered by a different man.

The First Onset of Trouble

When he was 3, Nikolas was diagnosed with developmental delays.

At age 5 he witnessed his father die of a heart attack.

“Nikolas came down the hallway and he went to his room, and he was crying,” a family friend told reporters. His mother then reportedly asked, “‘What’s the matter, did Daddy punish you?’ Just as clear as day, he said, ‘Nope. Daddy’s dead.’”

Lynda continued to raise Nikolas as a lone mother, a challenge compounded by the numerous disorders and conditions he had been diagnosed with. Citing records from the state Department of Children and Families, the Sun Sentinel reports that Nikolas suffered from depression, attention deficit hyperactivity disorder, emotional behavioral disability, and autism.

Nikolas saw counselors and took medication, while Lynda is said to have doted on the boy.

“She was his best friend,” said the family friend.

But Nikolas was socially awkward and had trouble making friends among peers, the Sun Sentinel reports, citing school records, and he was bullied.

Zachary told Palm Beach County Sheriff’s deputies last week that “he and his friends, when they were younger, had bullied Nikolas, which he now regrets ever doing,” according to the Sun Sentinel, citing the agency’s report.

But Cruz also reportedly had had obsessive-compulsive disorder and anger issues.

His mother contacted the police numerous times to report that Nikolas had become violent. When he was 14, his mother reported that he hit her with the plastic hose from a vacuum cleaner and, several months later, threw her against a wall.

According to the Broward Sheriff’s Office, the agency responded to 23 calls over 10 years.

In grade eight Cruz was moved to a school with a program for emotionally and behaviorally disabled children. While he went to Cross Creek School in Pompano Beach until January of grade ten, it was reported that he did not want to be there.

“Nikolas’ personal goal is to [be] mainstreamed to his home high school,” according to the Sun Sentinel, citing a Broward school system report from June 2015. “He often perseverates on the idea that his current school is for students that are ‘not smart’ and that he can now handle being in ‘regular’ school.”

It was around that time that school authorities documented a growing preoccupation with guns and death.

“Nikolas at times will be distracted by inappropriate conversations of his peers if the topic is about guns, people being killed or the armed forces. He will also engage in the conversation,” the report says, according to the Sun Sentinel.

But Cruz was determined to be “mainstreamed” and was conscientious about his grades.

“He is very concerned about his grades and how he is doing academically in class,” the school report reads, according to the Sun Sentinel.

Cruz was allowed to enlist in A-rated Stoneman Douglas High on Jan. 13, 2016 and passed 10th grade there. He is said to have had ambitions to join the military and was a member of the Junior Reserve Officer Training Corps.

But problems were never far. A neighbor’s son told the sheriff’s office that Cruz posted on Instagram that he planned to shoot up the school.

About a month into grade 11, Cruz was suspended for fighting. Then, just before his 18th birthday in September, a peer counselor told the authorities that Cruz might have attempted suicide by drinking gasoline and that he talked about wanting to buy a gun. He was also reported for self-inflicted wounds.

“Mr. Cruz has fresh cuts on both his arms. Mr. Cruz stated he plans to go out and buy a gun. It is unknown what he is buying the gun for,” the Sun Sentinel reported, citing a report.

He is also said to have displayed “hate signs,” including a Nazi symbol and the words “I hate [racial slur]” on his book bag.

Cruz has been described as lost, lonely, and violent.

Senior Tyra Hemans described Cruz as a loner and that he had unsettling mannerisms.

“He always stared at everyone,” she said, according to the Sun Sentinel. “He would stare into your soul.”

Hemans added that Cruz seemed “a little off.”

Cruz was ejected from Stoneman Douglas in Jan. 2017 for assaulting someone, and on Feb. 8 he was transferred to a different school.

In the fall of 2017, a commenter named Nikolas Cruz wrote on a Mississippi video blogger’s YouTube page: “I’m going to be a professional school shooter.”

Then, in November, Lynda Cruz died of pneumonia, leaving him devastated. The orphaned brothers moved in with a former neighbor, Rocxanne Deschamps.

But things continued to unravel.

On Nov. 29, Deschamps called 911 after Cruz threw a temper tantrum, punching walls and throwing items in the house.

She told the dispatcher that Cruz wasn’t welcome back, after he punched her son in the face and left to get a gun, according to the Sun Sentinel.

“I’m afraid [if] he comes back, and he has a lot of weapons,” she said in the 911 call released by the Palm Beach County Sheriff’s Office, as reported by the Sentinel. She reportedly said Cruz had bought a gun and left to retrieve it.

He allegedly took a single bullet with him.

“He was just somebody I took in because his mother just passed away,” she said, reported the Sentinel.  “ […] That’s all he wants is his gun and that’s all he cares about is his gun.”

Cruz already had eight firearms, Deschamps reportedly said, and kept them at a friend’s house because she wouldn’t let him keep them at her home.

“He put the gun to the head of someone before… and he did that to his mom,” she told the dispatcher. She said he also had once put a gun to his brother’s head.

After being kicked out of the Deschamps residence, Cruz called 911 to report that he had been assaulted and that someone had threatened to “gut” him.

Speaking to responding deputies about the incident, Cruz allegedly said that he’d gotten upset when he couldn’t find a photograph of his deceased mother.

“The thing is, I lost my mother a couple weeks ago,” he said, according to the Sentinel “so, like, I’m dealing with a bunch of things right now.”

The following day someone called the police to say that Cruz could be a “school shooter in the making.”

He was taken in by a different family, James and Kimberly Snead, whose son was friendly with Cruz.

According to the Sentinel, the Sneads said he followed their rules and kept his guns locked up.

Cruz got a job and enlisted in classes.

But he reportedly experienced intense feelings of isolation.

“He wanted a girlfriend so bad,” Kimberly Snead said, according to the Sentinel, “and I said, ‘Girls are trouble, stay away from them. It’s not worth it right now. You focus on getting yourself doing something in life.’”

“I think he was lonely,” James Snead said.

On Jan. 5, a woman called the FBI to alert them of a possible threat in the form of Cruz “getting into a school and just shooting the place up,” according to a transcript of the call. (pdf)

“I want to kill people,” the informant said Cruz wrote on Instagram, and, according to the transcript, told her interlocutor at the FBI , “I know he’s…he’s going to explode.”

On Feb. 14, Cruz told the Sneads that he was going to skip school.

Cruz is now charged with 17 counts of premeditated murder.