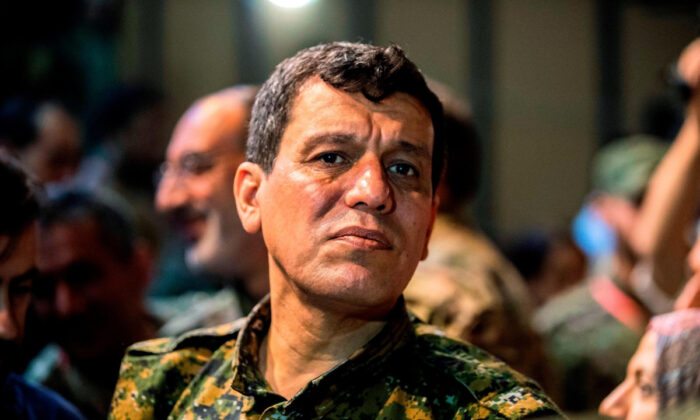 Gen. Mazloum Kobani Abdi, commander-in-chief of the Syrian Democratic Forces (SDF), attends a meeting with other commanders and representatives of the U.S.-led coalition fighting ISIS in a file photograph. (Dell Souleiman/AFP/Getty)
Middle East

SDF Chief: ‘Washington Has Sufficient Leverage to Mediate a Sustainable Peace Between Us and Turkey’

The commander-in-chief of the Syrian Democratic Forces (SDF), Gen. Mazloum Kobani Abdi, said that he wants the United States to “acknowledge” the role it can play in finding a political solution, and in helping to reach a sustainable peace between Turkey and Kurdish-led forces in Syria.

“But we do want the United States to acknowledge its important role in achieving a political solution for Syria. We are sure that Washington has sufficient leverage to mediate a sustainable peace between us and Turkey,” said Abdi in an “argument” published in The Foreign Policy on Oct. 13.

Abdi is leading the 70,000 strong SDF that, according to him, “fought against jihadi extremism, ethnic hatred, and the oppression of women since 2015.”

He said ISIS terrorists came from all over the world, and he told his soldiers to fight them because they “looted” their villages, “killed” their children, and “enslaved” their women. He said the SDF lost 11,000 soldiers while fighting against ISIS terrorists.

Abdi said after the Kurdish-led Syrian forces aligned with the United States, it withdrew its military fortification from the border with Turkey.

“Turkey would never attack us so long as the U.S. government was true to its word with us. We are now standing with our chests bare to face the Turkish knives,” he said.

Abdi wrote in his “argument” that SDF could understand and sympathize with the decision of the United States to withdraw, and President Donald Trump has been talking about it for long.

“Fathers want to see their children laughing on their laps. Lovers want to hear the voices of their partners whispering to them. Everyone wants to go back to their homes,” he said.

The general, however, said that the United States could play a role in finding a political solution for Syria and help in building sustainable peace between Turkey and Syria.

On Sunday, the Turkish Defense Ministry reported that the PKK/YPG controlled town of Rasalayn was captured and 415 “PKK/YPG militants were eliminated” since the beginning of the operation, according to a  situation report released by the Turkish think tank, Edam.

Robin Fleming, a researcher at Rojava Information Center based in Qamishli, Syria, told The Epoch Times on Friday that the Turkish attack has led to a humanitarian crisis.

“The conditions of the civilians are reaching the level of a humanitarian disaster with the estimated number of displaced civilians between 60,000 and 100,000. Our team on the ground has seen families with all their possessions in the back of a truck; people walking on foot—taking only what they can carry with their hands—all rushing to leave the cities in the face of attack,” she said.

‘We Believe in Democracy’

Abdi said SDF aligned itself with the United States because of its core belief in the principles of democracy.

“We are disappointed and frustrated by the current crisis. Our people are under attack, and their safety is our paramount concern. Two questions remain: How can we best protect our people? And is the United States still our ally?” he said.

In an earlier message posted on Twitter on Friday, Abdi had requested the United States to prevent Turkey from using the airspace for the attack.

“Our war would last for more than a year if the U.S. is unable to lay a peaceful solution with Turkey. We ask it to prevent Turkey from using the airspace, as we can defend ourselves,” he said.

His Friday’s message came a day after Trump said he could mediate between Turkey and Kurdish-led forces.

“We have one of three choices: Send in thousands of troops and win Militarily, hit Turkey very hard financially and with sanctions, or mediate a deal between Turkey and the Kurds!” Trump said on Thursday.

In his writeup in The Foreign Policy, Abdi said that the threat of ISIS still exists because many terrorists still exist in “sleeper cells” waiting to wage an insurgency.

“We know that we would have to make painful compromises with Moscow and Bashar al-Assad if we go down the road of working with them. But if we have to choose between compromises and the genocide of our people, we will surely choose life for our people,” he said.

In another message on Twitter on Friday, the general had said that the SDF doesn’t regret its relationship with the United States.

“We are disappointed, and Mr. Trump is working to reconcile us with Turkey. Our condition for dialogue is a ceasefire, but @POTUS is not doing enough,” he wrote.

Trump said in a statement issued on Monday that he will impose sanctions on any Turkish officials—whether current or former—who are linked to Turkey’s actions in northern Syria.

The President mentioned that the United States would immediately halt negotiations with Turkey over a $100 billion trade deal that was being hammered out between the two countries.

“This order will enable the United States to impose powerful additional sanctions on those who may be involved in—serious human rights abuses, obstructing a ceasefire, preventing displaced persons from returning home, forcibly repatriating refugees, or threatening the peace, security, or stability in Syria. The order will authorize a broad range of consequences, including financial sanctions, the blocking of property, and barring entry into the United States,” Trump said.