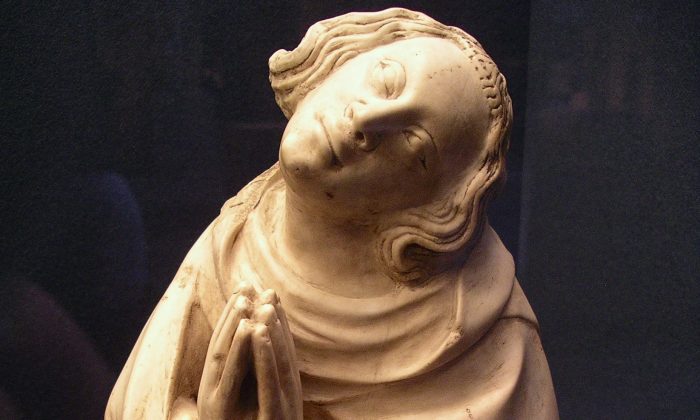 Sculpture of Saint Elzéar: Taking It on the Cheek

This small marble sculpture of a beautiful young man is a piece I visit almost every time I go to the Metropolitan Museum. I love the oval, spiraling rhythms, the sweetness of his facial expression, the open book that never slides to the floor, and the extreme angle of his head.

Bodies in medieval sculpture are often expressively distorted, but the gesture of this figure’s head is endlessly fascinating to me. His showcase, in a corner of the vast medieval sculpture hall, is starkly lit and the creamy, time-warmed marble soaks up the spotlight. The side of his face, which leans almost to the horizontal, captures light like a crescent moon.

The piece has, for me as a sculptor, two formal mysteries. One is inherent in its genre of high relief. It is a relief (because it has a flattened back and was carved from a fairly shallow slab of marble). Yet it functions like a free-standing sculpture—one that, rather than drawing us into the illusion of a space as does a painting or a typical relief, intrudes into and activates our space, exciting in us a sensation of mass or an awareness of personality.

Because the figure is turned towards us, his whole body echoes the opened, flattened book, but his tilted head and praying hands are fully carved in the round. His hands are freed from the stone, ready to turn a page or caress his chin. Sometimes they seem to me to be cupped around an invisible ray of energy that rises from or descends into his book.

Also mysterious are his companions—of what ensemble was this piece a part? To whom does the figure turn his face?

The Museum website informs us that this piece was one of a group of eight sculptural reliefs that decorated St. Elzéar’s tomb and illustrated his life story. Perhaps he was posed in prayer while looking upward to a crucifix or a Virgin and Child seated on a high throne.

But because the saint has been separated from his story, the sculpture now stands by and for itself. I like to imagine that his ecstatic gesture is a response to something beautiful that he has read in that fat little gravity-defying book.  Or that he lifts his cheek to receive something ineffable—the kiss of light itself.

The Metropolitan Museum’s website also informs us of the sculpture’s provenance. The saint’s tomb was destroyed in the French Revolution.

Elzéar of  Sabran had been an aristocrat, and the revolutionaries knocked heads off the Biblical kings and queens depicted on French cathedrals for reasons of rank and without regard for their saintliness. Some of those heads have been restored, some perhaps reattached at odd angles, but the marble statue of Saint Elzéar appears to be intact. His head bends as the sculptor intended.

The first owner of this fragment of the tomb’s sculptures was a friend and patron of the sculptor Rodin, Joanny Petel. The second owner was the sculptor George Grey Barnard (1863-1938), who studied in France and tried to emulate Rodin in his own early work. The Metropolitan displays a large marble sculpture by Barnard, The Struggle of the Two Natures of Man, in the American Wing. Barnard’s sculpture does show the influence of Rodin, and Michelangelo, but it doesn’t feel to me like an authentic exploration of man’s dual nature or a particularly successful sculpture, and I don’t like to look at it. It’s stagy and didactic, utterly different from the contemplativeness of Saint Elzéar.  For me, Barnard’s great contribution to art was his eager collecting of many fragments of medieval French art. His collection, with John D. Rockefeller’s help, would later become The Cloisters Museum, one of New York City’s unique treasures.

If you don’t get uptown to the Cloisters often enough, be glad this little piece of that great collection is in the Met. You may find me hovering over him, gazing down through the glass into his glowing face, my head tilted over to match his, lifting my cheek to the light.

Meredith Bergmann is a sculptor and poetry editor of American Arts Quarterly. Her current commission is for the FDR Hope Memorial for Roosevelt Island, NYC. Her sculpture may be seen at www.meredithbergmann.com.