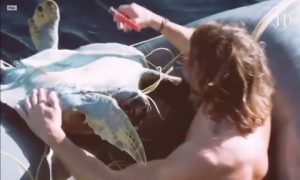 It is an amazing recuse of a giant manta ray all caught on tape. In the 3-minute video filmed at the depths of the ocean, viewers quickly see a manta ray trapped in discarded fishing line. A scuba diver, in the right place at the right time, is there to save the day and free the manta ray from its entrapment.

First thing the diver does is find the hook embedded in the manta ray to remove it. But after freeing the hook, the diver realizes much of the fishing line is still ensnared around the manta ray’s body and is left to be untangled. He patiently positions himself, swimming around its body, while beginning to untangle the line by hand. While doing so, he is careful to make sure he does not become ensnared himself.

“Ghost Gear” as it is called is discarded fishing gear left at sea. Hundreds of thousands of seals, turtles, whales, and other marine life are killed every year after becoming trapped by discarded fishing equipment. Viewers were shocked by the amount of line around this manta ray, and, fortunately, the diver could remove it all in time. But much marine life is not as lucky. Check out this amazing rescue for yourself and to see the harms of “ghost gear” lurking in our oceans.