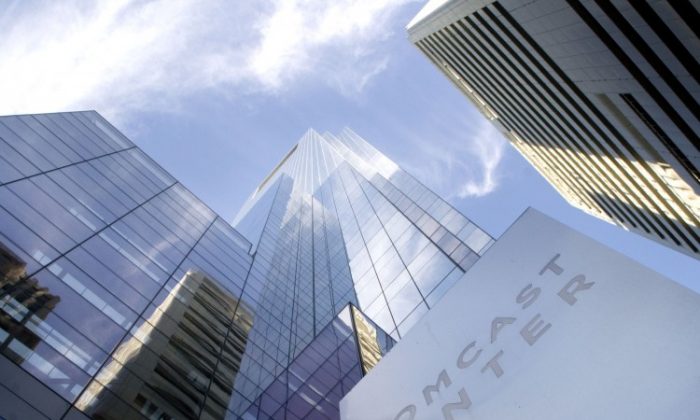 NO COMPETITION: The Comcast Center, which is Comcast Corporate headquarters, is seen Dec. 3, 2009, in Philadelphia, Pa., in this file photo. Having grown mainly through acquisition, Comcast has received very low customer service scores, hovering around the lowest when compared to its competitors. (William Thomas Cain/Getty Images)
Business & Economy

Heide B. Malhotra
View profile
Follow
biggersmaller
Print
Comcast Corp., formed close to 50 years ago by Ralph J. Roberts, Daniel Aaron, and Julian A. Brodsky and based in Philadelphia, Pa., prides itself with having grown into one of America’s largest cable and home Internet service providers. It is also among the top five telephone suppliers with operations in almost 40 American states.

Having grown mainly through acquisition, Comcast has received very low customer service scores, hovering around the lowest when compared to its competitors. Seen from an economist’s point of view, Comcast’s customers will jump ship at some point in time and take their business to its competitors.

Expert opinion suggests that Comcast does not care about customer service, as its financial results haven’t suffered from loss of customers.

“Because the information sector is heavily dependent on repeat consumer business, lower customer satisfaction implies that those companies that bucked the trend and strengthened their customer relationships are likely to take market share, while those that didn’t will face challenges [possible loss of customers] and more price pressure [reducing prices to keep customers],” according to a May press release by The American Customer Satisfaction Index LLC (ACSI).

ACSI rated Comcast a 59 out of 100 in the subscription television service sector, a decrease from 61 at beginning of the year. The highest score of 72 was awarded to Verizon Communications Inc., according to the latest scores released in mid-May.

Comcast, with the rating of 59 and an improvement of 1.5 points, is still on the lowest rung of the ladder when it comes to its telephone service, according to the mid-May scores.

Furthermore, in September 2010, a residential television service satisfaction study conducted by J.D. Power and Associates, a subsidiary of The McGraw-Hill Companies, ranked Comcast in the below average range overall, as well as in all categories, including cost of service, promotions, reliability, and customer service.

“The quality of the contact can pay dividends through decreased intention to switch providers. The stated likelihood of customers to switch providers within the next year declines from 13 percent overall to 7 percent among those who are highly satisfied with their customer service experience,” said Frank Perazzini, director of telecommunications at J.D. Power and Associates, in a September 2010 press release.

Comcast announced in May that “Meredith Attwell Baker will join Comcast as Senior Vice President of Government Affairs, NBCUniversal. Ms. Baker currently serves as a member of the Federal Communications Commission [FCC]. Her current term at the Commission expires at the end of June 2011.”

As an FCC commissioner, she voted in January for the approval of the joint venture of NBC Universal and Comcast’s cable and regional sports networks. The only dissenting voice came from Commissioner Michael J. Copps, who believed that this merger would provide Comcast with monopoly power and harm the public interest.

“Comcast’s acquisition of NBC Universal is a transaction like no other that has come before this Commission—ever. … It reaches into virtually every corner of our media and digital landscapes and will affect every citizen in the land. … It confers too much power in one company’s hands,” said Commissioner Copps in a statement published on the FCC website.

The U.S. Department of Justice published a long document discussing ethics rules for those employed within the government. The rule states that those contemplating future employment with a firm must recuse themselves from voting or working on issues pertaining to that firm.

Former FCC Commissioner Baker, as a political appointee and not a career government employee, does not have to abide by the strict government ethics rules. In the Baker situation, if no discussion took place during the FCC deliberations, and the offer came after the voting, Baker can’t be faulted.

Experts on government relations suggest that there is always a fine line between the conduct of those involved in certain negotiations, an unwritten language that promises future employment for positive outcomes, and the knowledge that sitting tight and waiting things out is the best strategy.

“Business as usual in Washington—where the complete capture of government by industry barely raises any eyebrows,” said Craig Aaron, president and CEO of the Free Press and the Free Press Action Fund, in an article on The Huffington Post website. “Such moves between the private sector and the government are common in Washington,” according to the Huffington Post article.

Continued on the next page … Scrutinizing Comcast’s Intentions