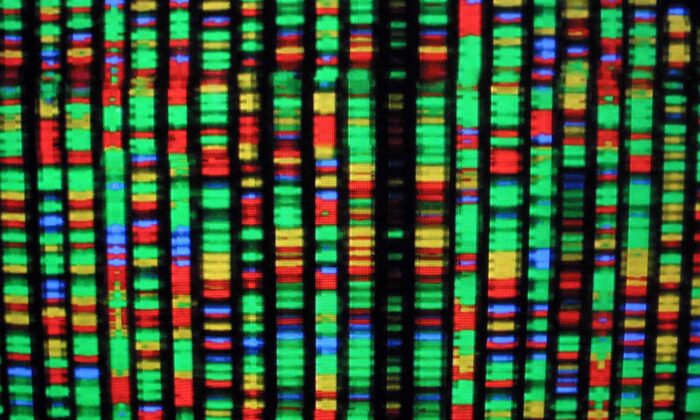 A digital representation of the human genome at the American Museum of Natural History in New York City on Aug. 15, 2001. (Mario Tama/Getty Images)
Judiciary

The Supreme Court agreed on April 25 to hear the appeal of Rodney Reed, who was convicted of murder and rape, and who now wants evidence found at the scene of the crime years ago to be tested for DNA, even though a Texas law forbids it because he took too long to raise the issue.

Justice Sonia Sotomayor foreshadowed the Supreme Court’s ruling in 2020 when she questioned the strength of the scientific evidence used to convict Reed.

The case is Reed v. Goertz, court file 21-442. Respondent Bryan Goertz, a Republican, is the district attorney for Bastrop County, Texas. The court granted the inmate’s petition in an unsigned order and, according to its usual practice, provided no reasons why it acted. The case is an appeal from the U.S. Court of Appeals for the 5th Circuit.

Reed, now in his 50s, was sentenced to death after being convicted in 1998 in the 1996 strangulation death of 19-year-old Stacey Stites. He denies committing the crime. When she died, Stites was engaged to Jimmy Fennell, a local police officer. Fennell was the last person who claimed to have seen Stites alive. He failed polygraph tests and invoked his Fifth Amendment right against self-incrimination.

Despite this, investigators didn’t search the residence he shared with Stites, the petition states.

Reed, a black man, acknowledged he was involved in a clandestine sexual relationship with Stites, who was white, after initially lying to investigators about it. Prosecutors argued that Reed kidnapped and raped Stites in the early-morning hours before her life came to an end. A jury convicted him and imposed a death sentence, the petition states.

The conviction, the petition continues, was based on a single piece of physical evidence—in this case, Reed’s spermatozoa—which was found in the decedent’s genital area. An expert testified that sperm can remain intact in a vaginal tract for no longer than 26 hours.

Reed “presented a substantial body of evidence” that “if true” casts doubt on the “veracity and scientific validity of the evidence,” Sotomayor wrote (pdf) in a statement in February 2020 when the Supreme Court refused to take the case.

“Misgivings this ponderous should not be brushed aside even in the least consequential of criminal cases; certainly, they deserve sober consideration when a capital conviction and sentence hang in the balance,” the justice wrote at the time.

“This evidence thus tended to inculpate Reed (by suggesting that he must have had sex with Stites very soon before her death) and exculpate Fennell (by indicating that Stites died after Fennell claimed to have seen her last),” Sotomayor wrote.

Texas law permits a convicted person to seek post-conviction DNA testing of biological material if specific conditions are met, but the 5th Circuit found (pdf) in April 2021 that Reed waited too long to seek it.

“An injury accrues when a plaintiff first becomes aware or should have become aware that his right had been violated,” the appeals court stated, adding that his claim, which he became aware of in 2014, was “time-barred.”

In 2019, the Texas Court of Criminal Appeals stayed Reed’s execution five days before it was to take place. Reed claims to have evidence that he and the victim were in a consensual sexual relationship; that Fennell, a white man, was lying and had racial animus towards Reed; and, as Sotomayor indicated in 2020, that scientific literature now shows that sperm can remain intact for days, casting doubt on the crucial time element in the prosecution’s theory of the crime.

Jane Pucher, a senior staff attorney at the Innocence Project, provided The Epoch Times with a statement on behalf of Reed’s legal team:

“Rodney Reed has steadfastly maintained his innocence for more than 20 years, and a substantial body of evidence has emerged supporting his innocence. Mr. Reed, who is black, was convicted in 1998 by an all-white Texas jury of the murder of Stacey Stites, who is white,” Pucher said.

“Among other things, new evidence of innocence points to Stites’ white fiancé, Jimmy Fennell, as the perpetrator. But Texas and the Texas courts have refused to allow DNA testing of key crime-scene evidence, including the ligature handled by the perpetrator in the commission of the crime. And when Mr. Reed sought access to DNA testing in federal court, the federal courts wrongly threw out his claims as untimely, reasoning that he could have started his federal action while the state-court proceedings were still pending,” she said.

“We look forward to having the Supreme Court consider our arguments.”