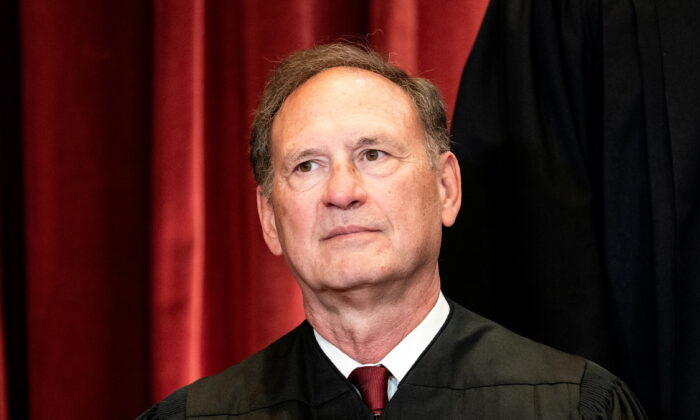 'Religious liberty is fragile, and religious intolerance and persecution have been recurring features of human history'
By Gary Bai

The Supreme Court justice who drafted the decision that overturned Roe v. Wade decried a “growing hostility” toward religion in the West in his first public appearance after the ruling.

“The problem that looms is not just indifference to religion, it’s not just ignorance about religion,” Alito said, starting his keynote address at the 2022 Notre Dame Religious Liberty Summit in Rome on July 21. His 37-minute speech was released on July 28.

“There’s also growing hostility to religion or at least the traditional religious beliefs that are contrary to the new moral code that is ascendant in some sectors,” the justice said.

The keynote address marks the top judge’s first appearance after the Supreme Court overturned Roe v. Wade, the 1973 decision that legalized abortion in the United States, with a ruling in Dobbs v. Jackson Women’s Health Organization. It came as a defiant comeback as lawmakers in the United States and across the world voiced opposition to the ruling, with some even calling the June ruling an “assault” on democracy.

Alito, a Roman Catholic, reflected on the parallels between the United States and Rome, as once a “proud” spiritual civilization, nonetheless proved “no human achievement is ever permanent.”

“I find myself thinking about the proud civilization that was centered here two millennia ago,” he said. “As I think back, I also think ahead, and I wonder what historians may say centuries from now about the contribution of the United States to world civilization.”

“One thing I hope they will say is that our country, after a lot of fits and starts, and ups and downs, eventually showed the world that it is possible to have a stable and successful society in which people of diverse faiths live and work together harmoniously and productively while still retaining their own beliefs,” Alito added, noting that the fact that Americans can exercise religious liberty has been “truly a historic accomplishment” for the country.

In this United States, the Justice said, where religious liberty goes hand-in-hand with many other rights, a “growing hostility” towards religion is threatening the protection of this sacred right across the country.

“And the problem that looms is not just indifference to religion, it’s not just ignorance about religion. There’s also growing hostility to religion, or at least the traditional religious beliefs that are contrary to the new moral code that is ascendant in some sectors,” the justice added.

Yet, according to Alito, this hostility to religion and religious freedom threatens a range of other fundamental rights.

“The exercise of religion very often involves speech, a spoken or written prayer, the recitation of Scripture, a homily, a religious book or article these are all forms of speech they are also forms of religious exercise. If this sort of speech can be suppressed or punished, what is to stop the state from crushing other forms of expression?

“We consider the relationship between freedom of speech and freedom of assembly. A religious service in a church, synagogue, mosque, or temple is a form of assembly. If a government can ban those assemblies, will it hesitate to outlaw others?

“On the other hand, if religious liberty is allowed, it will be harder for the state to restrict other speech and other assemblies,” Alito said.

While most legal academics nowadays believes that “religion doesn’t merit special protection,” Alito added, “the Constitution of the United States provides a clear answer” to the question of whether religious liberty warrants protection.

“Constitution protects the free exercise of religion … And for judges like me, who think to the belief that it matters what the Constitution says and what it does not say, that is enough,” the justice said. “It’s the law, and don’t ask me why.”

‘What Really Wounded Me’

In what he described as an “unusual” sense of “diplomatic impulse” in him, Alito responded to foreign lawmakers and celebrities who “felt perfectly fine commenting on American law.

“One of these was former Prime Minister Boris Johnson—but he paid the price—post hoc ergo propter hoc right?” Alito said, applying the “after this, therefore resulting from it” fallacy to the fact that the UK PM resigned after voicing opposition to the U.S. Supreme Court’s ruling.

But the justice did not stop there.

“What really wounded me—what really wounded me—was when the Duke of Sussex addressed the United Nations and seemed to compare the decision—whose name may not be spoken—with the Russian attack on Ukraine,” Alito said, referring to Prince Harry, who claimed the overturn of Roe v. Wade was a part of “a global assault on democracy and freedom” in a speech in July.

The justice went further to reflect on religious persecution across the world—such as in Nigeria, Egypt, and India—and, most prominently China, but all were not successful.

“During my lifetime, the People’s Republic of China did its best to eradicate religion completely. And yet it failed. Just as the Roman emperors who spent centuries trying to destroy Christianity failed,” the justice said.

As an example of this, Alito added, was that “the Cultural Revolution did its best to destroy religion, but it was not successful. It could not extinguish the religious impulse.”

The cultural revolution was a tumultuous period between 1967 to 1977, during which the Chinese Communist Party sought to eradicate traditional beliefs and values.

Alito’s speech came after the highest court made multiple rulings on cases pertaining to religious liberty in the United States, including a June ruling that ruled in favor of a football coach who petitioned for his right to pray and another ruling in the same month that struck down Maine’s ban on religious school funding.

Currently, plaintiffs in another high-profile religious freedom case before the Supreme Court is seeking in what they describe as China’s long-arm religious persecution in the United States.

Twenty-three attorneys general (AGs) across the nation, in a joint amicus brief, described the point of law in the case as “an issue of national importance,” supporting the plaintiffs.

The plaintiffs’ complaint (pdf) describes around 40 incidents of threats or physical assault against them for participating in parades representing Falun Gong, handing out flyers about Falun Gong, or managing a booth with Falun Gong-related literature in the United States.

Falun Gong is a spiritual practice consisting of meditative exercises and moral teachings centered on the tenets of truthfulness, compassion, and tolerance. It became widely popular in China in the 1990s. In 1999, the communist regime, perceiving that popularity to be a threat, began nationwide persecution targeting the practice and its adherents.

With respect to one incident in July 2011, two plaintiffs describe in graphic detail an attack by Li Huahong, head of the Chinese Anti-Cult World Alliance, a CCP-affiliated organization that targets religious dissidents overseas with violence and harassment.

According to two witnesses, a mob of 20 to 30 people then surrounded two Falun Gong practitioners. One of them was held for about 30 minutes until the police arrived, while a mob yelled “kill her” and “beat her to death.”

“In this case, a religious group known as the Falun Gong, which originated in China, experienced persecution and harassment on American soil,” according to a statement from Texas Attorney General Ken Paxton’s office on June 29.

“The group started in China under a Communist regime hostile to religious pluralism,” the AGs wrote. “Many Falun Gong practitioners have thus fled to America. Yet even after coming here, Petitioners allegedly continue to face persecution and abuse from Communist sympathizers.”

The AGs, in their amicus brief, said the 2021 ruling of a lower court dismissing the case is “wrong on an issue of national importance that stands at the center of our constitutional tradition”—namely, religious liberty.

In doing so, the court “unduly narrowed a statute meant to bar the worst acts of violence in many of America’s sacred places,” the AGs said.

“America’s commitment to religious freedom is ‘essential.’ … It constitutes ‘one of our most treasured and jealously guarded constitutional rights,’” the AGs wrote, quoting previous court opinions.

“Our hearts are restless until we rest in God,” Alito said in his speech.

“And, therefore, the champions of religious liberty who go out as wise as serpents and as harmless as doves can expect to find hearts that are open to their message,” the justice said.