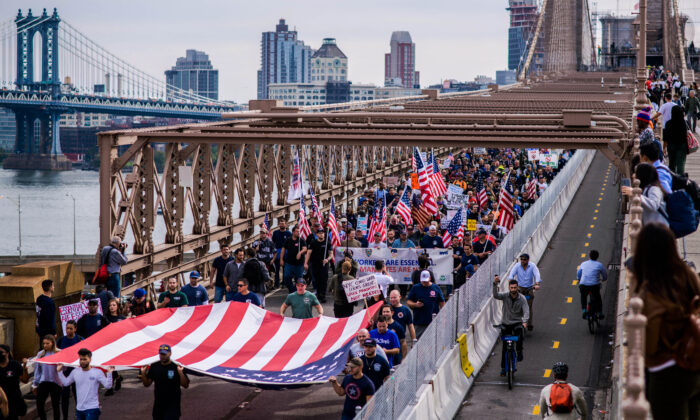 Municipal workers hold placards and shout slogans as they march across Brooklyn Bridge during a protest against the COVID-19 vaccine mandate, in New York on Oct. 25, 2021. (Ed Jones/AFP via Getty Images)
Viewpoints

It was supposed to take two weeks to flatten the curve. Instead, in less than two years, America’s authorities have flattened the republic.

From the arbitrary and capricious suspension of basic life for months on end to pervasive censorship and the undermining of the integrity of our elections, our Ruling Class has piled incalculable costs in life and liberty on top of the casualties of the Chinese coronavirus via its despotic response to the disease—while it accrued ever-greater wealth and power.

For the latest evidence of COVID-related rot in our republic, look to the Supreme Court—an institution albeit long on the downslide since well before the onset of the pandemic, under its institutionalist chief justice.

Its unwillingness to halt New York State’s coronavirus vaccine mandate for health care workers during the pendency of litigation raised by faithful objectors not provided even the option of a religious exemption—which follows the court’s dismissal of a similar Maine case—is even more disturbing than might appear at first glance.

The immediate takeaways are as follows:

First, nurses and doctors—those who stood in the trenches during the throes of the pandemic—are being rewarded for their efforts by losing their livelihoods because they refuse to jab a needle in their arm as a matter of conscience.

Second, even accepting differences in the merits of the cases, the Supreme Court’s ruling ought to give pause to those who assume its strike-down of the Biden administration’s vaccine mandate for employers of more than 100 people is a layup.

Third, the court’s de facto blessing of COVID-19 vaccine mandates of any kind under any circumstances—even when it comes to health care workers, who might be held to stricter standards on grounds of health and safety—arguably legitimizes tyranny.

Consider: This isn’t a disease indiscriminately rampaging through society and killing everyone—far from it, it targets the elderly, overweight, and those with comorbidities acutely, with fatality rates infinitesimal, and serious illness far less likely for most everyone else. Numerous studies show that natural immunity is substantially more durable than the protection conferred by vaccination, yet it’s ignored in New York’s policy, undermining its scientific rationale. The vaccines of course wane, can generate adverse events, neither prevent infection nor transmission, and the medium- and long-term effects of these experimental drugs are unknown.

That thousands of health care workers across the country—who one would think might have some insights when it comes to vaccines—have refused the jab ought to tell us something. And if we face an impending disaster that will require all able hands, wouldn’t that also cut against the mandate?

This is to say nothing of course of the constant goalpost shifting; the censorship of dissenting views, lack of open debate (let alone legal recourse), and transparency in data on which we would have it; that virtually every major public policy around the Chinese coronavirus has lacked anything resembling a cost-benefit analysis; the coercive nature of the vast majority of measures imposed on the public; and the vile, un-American attacks on those who refuse to comply with the regime’s favored positions that have marked the entire pandemic.

Setting aside science, which authorities have misused throughout the past 21 months as a stand-in for politics, in a free society, people must be left to make their own decisions regarding their health and well-being. Our natural rights don’t disappear because Dr. Anthony Fauci decrees it.

New York is one of all but three states in the country not to understand, or more likely not to care one iota, about all this. The state has done nothing to demonstrate that it’s acting rationally and in good faith throughout this pandemic. And adding injury to insult, its public health results—which its last governor famously tried to cover up—have been disastrous to boot.

While New York can be flippant, the Supreme Court can’t be. It is duty-bound to uphold constitutional rights when under assault. Yet even if its refusal to provide injunctive relief in the two New York cases at issue doesn’t represent a ruling on the merits, it constitutes a statement from the high court that it won’t even temporarily respect those most sacred rights of the faithful while their cases are adjudicated.

Not only will the highest court in the land abide First Amendment abrogation—it will privilege the pseudo-religion of Scientism above the Judeo-Christian faith bedrock on which America relies.

The court allows clear discrimination against religious objectors because New York carves out those seeking medical exemptions. Once again, questionable “public health” that must not be questioned takes priority over religion.

This isn’t the first time during the pandemic that we have seen governmental authorities subordinate the fundamental rights of the politically disfavored faithful to the whims of our progressive betters.

During the summer of 2020 in blue cities across the country, such as New York, the Woke were permitted to march, riot, and loot with impunity, while the Chosen could neither gather to pray nor bury the dead.

Wokeism and Scientism, which appear to be jockeying for competition as to which represents the strongest Ruling Class force, increasingly trump Christianity and Judaism.

Why would we expect the Supreme Court to be immunized against these strains of elite thought, and to be immune from the hysteria, the Pandemic of the Indoctrinated, that has poisoned elite discourse for nearly two years?

Justice Neil Gorsuch wrote in his dissent that “The test of this Court’s substance lies in its willingness to defend more than the shadow of freedom in the trying times, not just the easy ones.” The Roberts court has failed this test both in times trying and easy.

Whether at the “conservative” Supreme Court, in the White House, or your governor’s office—with rare, blessed exceptions—Scientism and the cult of Public Health prevail.

We the people are the only check on the tyranny that has infected our body politic.