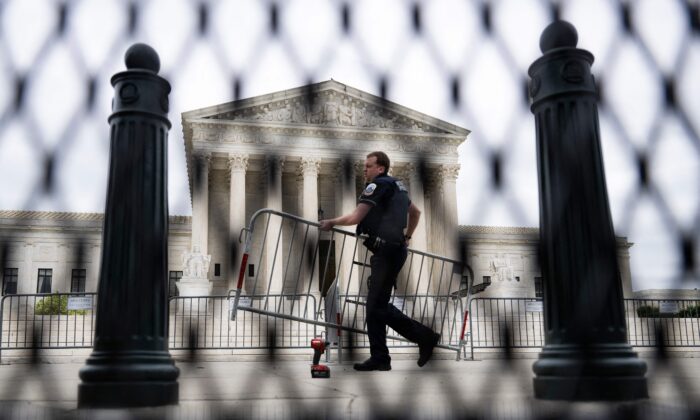 A police officer carrying a barricade is seen through un-scalable fence that stands around the U.S. Supreme Court on May 5, 2022. (JIM WATSON/AFP via Getty Images)
Judiciary

The Supreme Court announced on June 6 that it would hear the appeal of two Montana property owners who claim the U.S. Forest Service unilaterally and unlawfully changed the terms of a decades-old public access agreement affecting their private land.

The case is Wilkins v. U.S., court file 21-1164, an appeal against a ruling by the U.S. Court of Appeals for the 9th Circuit, which threw out the property owners’ claim on procedural grounds. The case concerns the federal Quiet Title Act, which allows parties to sue the United States government in property disputes under certain conditions.

The petition seeking review was docketed on Feb. 23. As is their custom, the justices didn’t explain why they granted the petition.

The petitioners are Larry Steven “Wil” Wilkins, a veteran diagnosed with post-traumatic stress disorder, and Jane Stanton, a widow.

In 2004, Wilkins purchased property in rural Ravalli County, Montana. Stanton and her husband purchased a nearby property in 1990. Her husband died in 2013, according to the petition (pdf) filed with the high court.

Both their properties are subject to an easement owned by the federal government and managed by the U.S. Forest Service, an agency of the U.S. Department of Agriculture. The easement, which dates back to 1962, conveys to the United States “and its assigns” a 60-foot easement “for a road as now constructed and in place and to be reconstructed, improved, used, operated, patrolled, and maintained.”

The original easement provided that the use of the road was to be limited to Forest Service employees and approved permit holders, such as loggers and ranchers, providing access for necessary maintenance of the surrounding forest lands. Access to the road was never intended to extend to the general public.

But the situation changed in 2006, when the Forest Service installed a new sign on the road that reads “public access thru private lands.” Since the sign arrived, traffic along the easement has surged, interfering with the petitioners’ enjoyment of their property. The Forest Service’s maintenance of the right-of-way has become increasingly sporadic in recent years.

The petitioners and their neighbors “have had to deal with trespassers on their private property, theft of their personal property, people shooting at their houses, people hunting both on and off the easement, and people traveling at dangerous speeds on and around” the local road, which has suffered erosion as a result of increased use. The road condition has caused sediment and silt to build up on properties, and this has resulted in washouts on those properties. The expanded use even caused some neighbors to move, the petition states.

The petitioners argue that they’ve become victims of a “bait and switch” scheme by the Forest Service, which trampled on their property rights by ignoring the provisions of the original limited-use easement and allowing access to their private road by strangers, according to the Pacific Legal Foundation (PLF), a national public interest law firm that represents Wilkins and Stanton.

“The government should not be able to manipulate procedural rules to prevent landowners from getting their day in court to protect their property rights,” PLF attorney Jeffrey McCoy said in a statement. “The deck is already stacked when individuals challenge the government. The Ninth Circuit’s opinion, if it is allowed to stand, makes it even more difficult for property owners to vindicate their rights.”