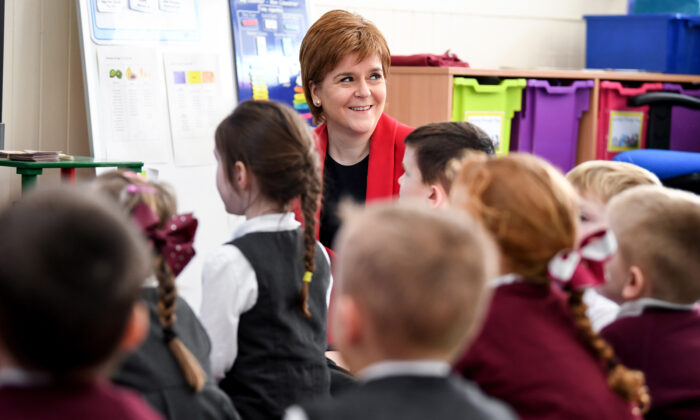 The Scottish government on May 19 launched a consultation on creating a statutory school uniform guidance.

The draft list of principles includes reducing the cost of the uniforms and promoting “equality, including recognising specific matters relating to religion and belief, disability, sex, and gender.”

Pupils, parents, and other stakeholders have been asked to submit their views on what the guidance should include; the role that school uniform plays within the ethos, culture, and day-to-day school life; how to reduce cost; and the draft list of principles.

The Scottish Green Party suggested the guidance may include gender-neutral uniforms.

The guidance is aimed at “both reducing the cost of the school day and addressing equalities issues such as gendered school uniform rules which see young women and girls pay more for their uniforms,” the party said in a statement.

“It is hoped that new rules will address the financial issues caused to families when schools set needlessly specific uniform policies, use expensive exclusive providers for products such as blazers and do not consider the cost of mandatory additional items such as PE kits,” it added.

The government said it does not intend to bring in a legal requirement to wear school uniforms.

Education Secretary Shirley-Anne Somerville said, “School uniform can promote a sense of identity, belonging, and connectedness to school. However, the cost can be a significant burden for families, although there is no legal requirement to wear [a] uniform.

“We have increased the school clothing grant to help families who need it most. Now we intend to go further by bringing forward national guidance aimed at reducing uniform costs. This could mean increasing the use of generic items of uniform.

“I would encourage anyone with an interest to have their say on how this guidance should look. It is essential that the views of children and young people are heard as part of this consultation.”

Scottish Green education spokesman Ross Greer said the guidance would mean parents can choose “good value clothing,” as well as promoting equality “through inclusive guidance, from removing unnecessary rules around what each gender should wear, to ensuring appropriate options for religious clothing.”