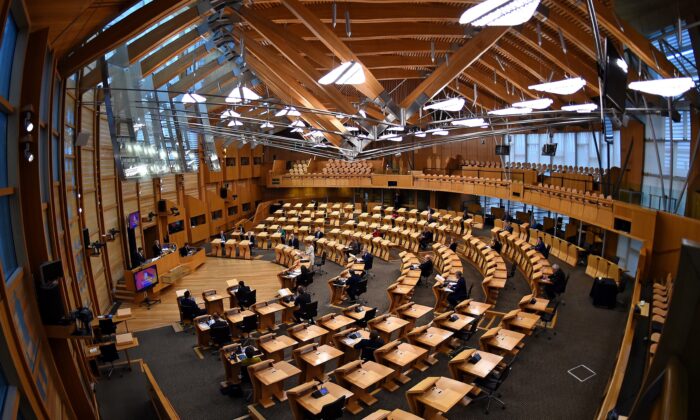 General view during the First Minister's Questions at the Scottish Parliament in Holyrood, Edinburgh, Scotland, on Jan. 13, 2021. (Andy Buchanan/Pool via Reuters)
UK

Holyrood voted on Thursday to support the implementation of COVID-19 vaccine passports in Scotland’s nightclubs and other crowded venues.

With the backing of the Greens, the SNP government was able to push through its motion with 68 votes to 55 following a heated debate.

Participants in vaccine trials, those who are medically exempt from getting the vaccines, and employees of the venues are exempt from the vaccine mandate.

A negative test for COVID-19 will not be accepted at this stage. According to a document published hours before the vote by the Scottish government, accepting proof of negative test results “could undermine one of the policy aims of the scheme, which is to increase vaccine uptake,” and to prevent limited PCR lab capacity from being overwhelmed by clubbers.

But the paper said this will be kept under review. It also said the vaccine passport scheme could be extended to 16- to 17-year-olds once they have a chance to get the vaccines.

From October 1, the scheme will make a QR code available through a smartphone app—along with a paper alternative for those who need it—which will be scanned before entry is allowed to venues.

The UK government confirmed on Wednesday that club and event-goers in England will be legally required to produce proof of full COVID-19 vaccination from the end of September—if the proposal is voted through in Parliament.

It’s unclear if the government will get enough votes to back the plan, which triggered a cross-party backlash.

Governments in Wales and Northern Ireland have not yet introduced plans of using vaccine passports for domestic venues.