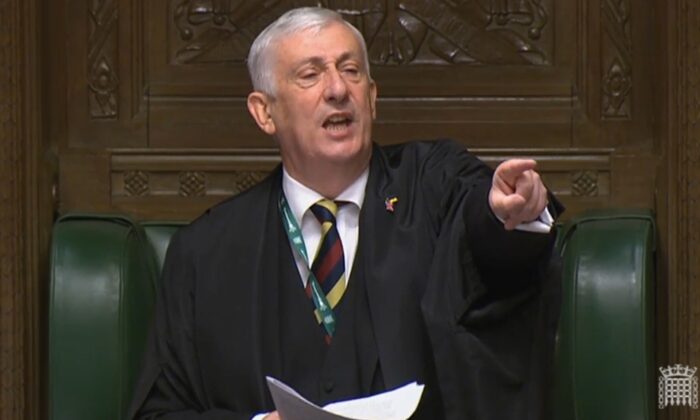 Speaker Sir Lindsay Hoyle as he throws out Alba Party pair Kenny MacAskill (East Lothian) and Neale Hanvey (Kirkcaldy and Cowdenbeath) at the start of Prime Minister's Questions in the House of Commons, London, on July 13, 2022. (House of Commons)
UK

Scottish Nationalist MPs Thrown out of Parliament Over Protest Against Johnson

Two Alba Party MPs were kicked out of Parliament on Wednesday after they refused to stop shouting at Prime Minister Boris Johnson in a protest over Scottish independence.

The first Prime Minister’s Questions session after Johnson resigned as the prime minister was delayed for several minutes because of the rowdy incident.

At the start of the session, Kenny MacAskill, deputy leader of the Alba Party, could be heard shouting “we need a referendum” before his voice was drowned out by heckling from other MPs.

“I will not tolerate such behaviour. If you want to go out, go out now.” Hoyle said. “If you stand again, I will order you out.”

Hoyle also had to tell Conservative MPs to “shut up for a minute” from heckling as he attempted to maintain order in the chamber.

MacAskill rose to his feet again before his colleague Neale Hanvey, parliamentary leader of the party, also stood up and started speaking, but it was impossible to hear what he said.

After issuing another warning, Hoyle ordered a serjeant-at-arms to escort the two MPs out.

MacAskill and Hanvey were both elected as Scottish National Party (SNP) MPs and defected to the Alba Party last year. There are no other Alba Party members in Parliament.

Speaking to reporters outside Parliament after being kicked out, MacAskill accused Johnson of “distorting parliamentary democracy” and “denying Scotland its legitimate right to referendum.”

Hanvey later told GB News that their protest was “effectively direct action activism in the chamber, giving voice to the concerns of our supporters in the wider ‘yes’ movement and to say that ‘up with this, we will not put.'”

In a Scottish independence referendum in 2014, around 55 percent of Scottish voters voted no to independence. But the pro-independence SNP has pushed for another referendum, colloquially known as indyref2, since the UK voted to leave the European Union.

After pro-independence parties won the majority of seats in the Scottish Parliament in 2021, the parties have insisted that they now have an “indisputable” mandate for another independence vote, while Johnson insists another referendum shouldn’t happen so soon after the first one.