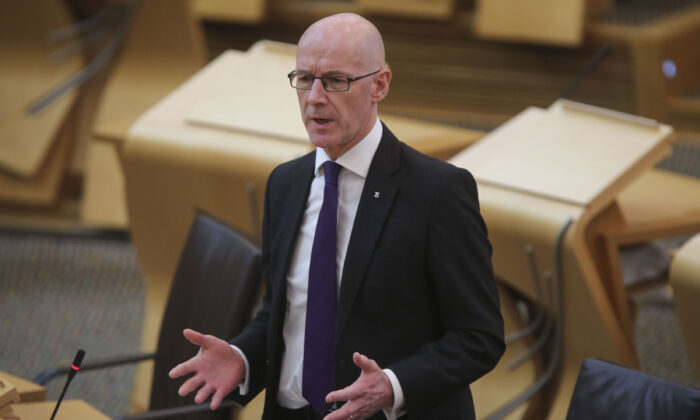 Scotland’s deputy first minister has been accused of “twisting data” in a “desperate” attempt to justify the region’s COVID-19 restrictions, which are significantly stricter than in neighbouring England.

The Scottish National Party (SNP) administration imposed a ban on large-scale events including football matches on Boxing Day in order to slow the spread of the Omicron variant of the CCP (Chinese Communist Party) virus, which causes COVID-19. On the following day, all nightclubs were closed and pubs and restaurants were limited to table service only.

Talking to the BBC’s “Good Morning Scotland” programme on Jan. 4, Deputy First Minister John Swinney cited Office for National Statistics (ONS) data published on Dec. 31, which showed 1 in 25 people in England had COVID-19 compared to 1 in 40 in Scotland.

He said the ONS survey had demonstrated a “very important distinction” between Scotland and England.

The ONS data covered the week ending on Dec. 23, but Swinney called it “the strongest evidence” that the Scottish government’s measures were “protecting” the public and the National Health Service (NHS).

Opposition parties accused Swinney of using outdated information to justify restrictions that came into force after the data was collected.

Dr. Sandesh Gulhane, shadow health secretary for the Scottish Conservatives, said it was “desperate stuff” that Swinney was “using out-of-date evidence to try and justify” the curbs.

Alex Cole-Hamilton, leader of the Scottish Liberal Democrats, said Swinney “has form for twisting data to save face.”

The party’s health spokeswoman Jackie Baillie said: “Scottish ministers taking to the airwaves to misrepresent the stats and brag about how much better we are doing than England miss the point. The battle is to save lives and livelihoods, not play cheap constitutional politics.”

But the Scottish government said criticisms of Swinney’s use of data were “totally unfounded.”

“Prior to Boxing Day there were already substantial differences in COVID protections between Scotland and England—most importantly on wearing face coverings,” said a spokesman.

“The ONS findings, published last week, show markedly less infection in Scotland than in England, and the deputy first minister was making the entirely valid point that this is evidence that the different approach we are taking in Scotland is helping protect the population from the virus,” the spokesman was quoted by The Telegraph as saying.

As a result of the stricter restrictions in Scotland, thousands of Scots reportedly travelled across the border to celebrate the New Year in England, where restrictions are considerably more relaxed and nightclubs remain open.

Scotland’s First Minister Nicola Sturgeon said on Jan. 5 that restrictions on large gatherings and hospitality businesses will remain until at least Jan. 17.

She told the Scottish Parliament that the situation had not abated enough to scrap the latest restrictions and Scots are being asked to continue to limit their social contacts.