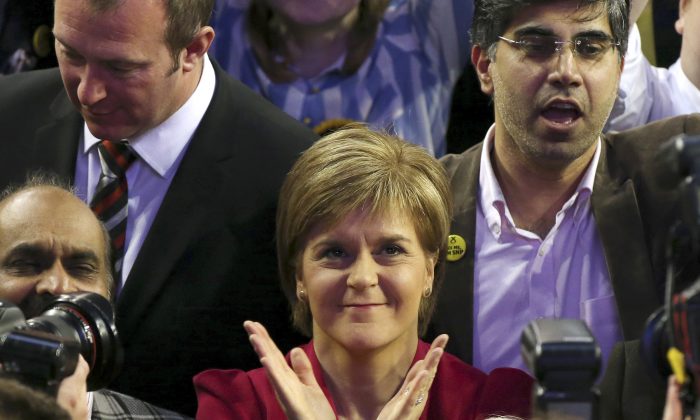 First Minister of Scotland and Scottish National Party leader Nicola Sturgeon, center, celebrates with the results for her party at the count of Glasgow constituencies for the general election in Glasgow, Scotland, Friday, May 8, 2015. (AP/Scott Heppell)
Europe

BRUSSELS— Scotland’s top politician is warning that a future United Kingdom referendum on leaving the European Union could spark a new drive for independence in pro-EU Scotland.

First Minister Nicola Sturgeon on Tuesday called for a “double-majority” system in the 2017 referendum that would require the support of England, Wales, Northern Ireland and Scotland before the United Kingdom could leave the EU.

Sturgeon warned in a speech in Brussels that British Prime Minister David Cameron’s “in-out” referendum to be decided by a simple majority of Britons “would provoke a strong backlash.”

She says “the groundswell of anger among many ordinary people in Scotland in these circumstances could produce a clamor for another independence referendum that may well be unstoppable.”

Scots voted against independence in a referendum last September.